Weigh-In Wednesday: this sh*t is hard

For the past 5 weeks or so, I've been following Weight Watchers, going to the meetings, and trying to up my workout game.  It worked for awhile.  You can't even see the starting weight but from highest to lowest it was 11.8 pounds.  Before I started to screw up. 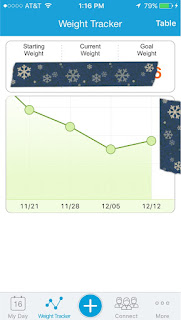 This is after my weigh-in on Saturday at WW (yes, I covered the weights because I hate the numbers).  I gained .6 pounds last week and I weigh in at home on Wednesdays so I know I'm up another pound from here.  It pisses me off because no matter how perfect I am in the next 3 days, I will not be able to show a loss.  What's the point of going if you are going to show you failed?  For 2 weeks in a row.

This worked for about 4 weeks.  Then I started sabotaging myself by going into the teacher's lounge, eating treats, and being frustrated by the changes to the points system this past week.  Before I felt like I could go out, have a beer, eat a cookie, etc because I had enough flex points each week to do that.  Now? Not even close.  It's stupid because for the first 4 weeks, I was allowed 26 points and only one week did I go into the 49 flex points.  Now I get 30 points and every day I'm into the flex points and I'm gaining weight.

It makes me want to give up because it's too hard.  It's hard being around all the tempting holiday treats and it's hard to re-figure everything I was eating before.  Obviously, the first 4 weeks I did fantastic, losing almost 12 pounds.  Now the scale is going back up again.  I feel like I've blown 4 weeks of hard work.  I can't even eat the exact same meals as I did the past 4 weeks because the point values changed on some of them.  My "allowed" points only went up by 4 a day but my weekly flex points dropped from 49 to 28.  That's almost cut in half.  I'm now being penalized because I don't want to use fake shit - like margarine, gross fat free dressings, fake cheese, or "diet" bread.  Before the values of the foods I was eating were low enough that I could still stay within my points and I had enough flex points to put a little real butter on my decent tasting piece of toast in the morning if I wanted to but now I can't do that. My breakfast jumped from 9 points to 12 because of the changes.  My lunch went up too because my salad dressing changed. Today I used a tiny but of jam instead of butter but it wasn't the same.  I've also cut myself from 2 eggs to 1 egg plus those liquid egg white things to go from 4 points down to 2.  One day for breakfast I did just yogurt and fruit and I was starving by 11:00.  I don't know what to eat anymore.

I really don't know if I'm going to stick with this.  Someone in a FB group I belong to suggested I go back to using the Points+ tracking but since I track 100% through the app, I can't even do that because everything in the app is converted to Smart Points.  If I have to carry a paper tracker around with me and all the books, I know I won't track a single thing.  Another thing that's flawed with that suggestions.  What's the point of paying for all the e-tools if you can't even use them?

So yes, I've made progress since I decided to get back on track but the past week I feel like I've done nothing but screw up.  Someone even noticed last night that I looked thinner when I feel like it doesn't show at all.  That's cool but it's hard to be happy knowing it isn't going to last.  Sadly, I feel like I'm going to end up right back where I started because I can't seem to figure this out and I'm too much of a failure to have the self control to stay out of the lounge and away from the treats.
at December 16, 2015 No comments:

Short and sweet because I only have a few minutes:

1.  I'm thankful for friends who send awesome surprise packages my way.  My friend and fellow Michigan BAMR Betsy saw something at Disney when she was there for Wine and Dine and thought of me (how incredible sweet is that?).  She said she'd send it to me and then yesterday a whole package of awesome stuff showed up at my door!  She sent me this little Disney trinket (which will be very loved by someone SHHH it's a gift) but also included some cool makeup and a bunch of Picky Bars!  Betsy is definitely one of a kind and I love that she did this.  It made my night when I was otherwise not having a great evening.

2.  I'm thankful for PT.  Yesterday I ran 3 nearly pain-free miles on the TM before my PT session and then Terence cut me loose!  I'm not officially cleared to train for the DONNA :)  I'm planning a 4 mile run for Saturday morning - wish me luck!

3.  I'm thankful for dear friends who invited me out for a girls' night tonight.  We are going to the Uptown Holiday Shop Hop - a walking/trolly/shopping extravaganza.  If you are local to Grand Rapids, MI, you should definitely check it out.  I've never gone so I'm excited to see what it's all about. Let's just hope I don't blow 4 weeks of Weight Watchers in one night because I also hear there are snacks and boozy specials.  The best part will be hanging with Jenn, Andi and Susan.