It's the final weigh in for the Shrinking Days of Summer Challenge and I got to add a button to my blog! I'm down a total of 5 lbs during the 4 weeks I have been on this challenge with my awesome, strong, motivating Team Peach teammates. When I started the challenge 4 weeks ago, I was at 165.8. This week, I lost another 1.6 lbs and finished the challenge at 160.8 lbs. I didn't meet my goal of 10 lbs, but that probably wasn't a realistic goal anyway. And, besides, I'm NOT finished-just because this challenge is over doesn't mean my weight loss journey ends here!
Here are a few of the benefits to participating in this challenge: 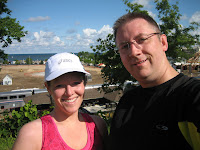 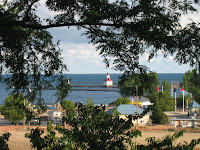 So, congrats to everyone who participated in the Shrinking Days of Summer Challenge, and thank you for all the words of encouragement and support for the past month. I can't wait to see what the Sisterhood has up their sleeves next!

Well, my hubby and I managed to finish a 5K this morning. We ran it together and finished together with a time of 37:31. Not the best time (my worst, actually) and I'm pretty sure I came in last in my age group, but we kept moving the entire time and finished. The weather yesterday was horrible-cold and drizzly-with more of the same predicted for today, but when we woke up, the sun was shining and it was a cool 63 degrees. Perfect weather for running along the Lake Michigan shore. The course was beautiful with some challenging hills. Now, do I keep running?????
at July 18, 2009 2 comments:

Disappointed, disgruntled, disheartened, throw in whatever "dis" word you want, and that's me. I'm having my own personal pity-party here and it's my party and I'll bitch and moan if I want to. As I ran this morning, I had the Trailer Choir's song "Rockin' the Beer Gut" playing over and over in my head as my fat jiggled like jello. It's great that the gal they sing about in that song is proud of the "extra love around her waist", but I absolutely hate mine. I hate my gut, I hate my muffin top, I hate my chub-rub, I hate my batwings, I hate everything in between!

As you've probably guessed, I'm up 1.4 lbs this week to 162.4. I was really hoping to hit the 150's this week, but no, I had to spend the weekend with friends and gain weight. One of the friends I was with is vegetarian (vegan actually) and I decided I would just be her for the weekend. Apparently, vegan food isn't as slimming as I'd hoped when it's really good and you eat too much of it. I had some really great food and stayed away from the beer at all the brewpubs we went to (I only had 1 full beer the whole weekend, plus a few sips from my hubby's samplers), but clearly I did not make as good of choices as I could have. Now I know I shouldn't be making excuses, and I'm trying not to, but this whole not being able to lose weight thing is really pi**ing me off! I've been on this challenge for 3 weeks now and I've managed to lose a whopping 3.4 lbs. After last week, I was .2 from my 5# button and I couldn't even pull that off.

To top off the poor weigh-in, I'm really discouraged by my running. I'm up to running for 25-30 minutes without walking, but I'm so incredibly slow that I might as well walk and save my aching knees. My 5K race is this Saturday, and at my 12 1/2 minute mile pace, I'm going to need to run for close to 40 minutes. My poor husband is doing this with me and I feel like such a slug panting along next to him and slowing him down. This is his 1st 5K, so I should be happy he agreed to run with me, but I feel like I'm holding him back.

Next week and the week after that don't look like they are going to get any better. I'm taking a grad class that meets every day, all day next week and is about an hour from my house (each way). There is no way I can work out before class because the sun doesn't come up until around 6:15 and I won't run in the dark. (I woke up at 5:45 this morning to run before work - I don't normally work in the summer but I was covering for a friend who is on vacation - and ended up hitting snooze for 1/2 an hour until it got light enough to run outside). I may be able to work out after class, but really prefer exercising in the morning. After sitting in class all week, we are headed to Washington DC for vacation for another week. Meals out for 7 days should do wonders for my waistline. At least I'll probably get a ton of walking in, but won't be able to run (I won't run in an unfamiliar area) or do any weight training. We are camping while we are there, so I won't even have use of a hotel exercise room.

How am I supposed to pull this weight-loss thing off? I should know how, since I lost 50 lbs on WW back in the early 90's and kept it off for 6 years, but it is so much harder now. I feel as I've approached 40, my metabolism has ground to a screeching halt and I have to eat 1/2 as much and work out twice as hard to get the same results. I'm starving and sore.

To make matters worse, I have a 12 year old daughter who I should be modeling healthy habits and attitudes for. Luckily, she is a very athletic, active, healthy girl right now. Hopefully she will stay that way and puberty, with all of its boobs and hips, won't throw her for a loop. I really don't want her to grow up with the same issues I've had with weight and body image (I've been heavy since I was a teen and don't want that to happen to her). How am I supposed to keep her healthy when I can't even seem to take care of myself? Anyone have any insight into that one?????

Thanks for letting me bitch and moan. I will try my best to finish this challenge with at least a little bit of a loss over where I started. Luckily, my Team Peach sisters had successful weeks this week and I'm encouraged by their progress. Way to go, girls!
at July 15, 2009 1 comment:


I am happy to report that I am down another 1 pound this week, to 161.0 lbs. Not as much of a loss as I had hoped, but good considering my family's fun weekend up north in Silver Lake, MI with my sister 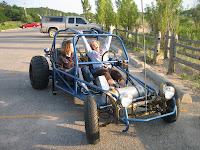 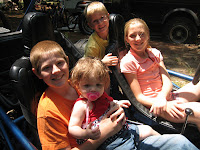 (That's me in the driver's seat of the dune buggy. The two big kids are mine and the little ones are my niece and nephew. The lighthouse is the Little Sable Point Lighthouse.) 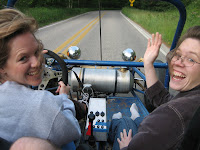 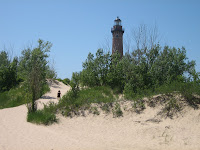 I managed to keep up my running schedule of 3 x per week (I'm now running 2 1/2 miles consistently and my 5K is coming up) and strength training 2 x per week. My nearly 40 year old body is starting to complain a bit as my knees and legs are aching pretty much all the time, but that is what Advil and Alieve were made for. I also kept within my points range every day, except I didn't track over the weekend. I think I did pretty well, though.


Now it's time to plan for my next trip. We are going to a bunch of brewpubs with friends this weekend, and there is usually nothing on the menu that is even remotely healthy. (Lots of bar food, yummy steaks, etc.) One of the gals is vegan, so my plan is to just eat what she eats all weekend and hope for the best. At least there will be no dairy or animal fats! I also need to keep up my training for the 5K. It actually falls a week ahead of my training schedule, so it is going to be a bit of a stretch to finish without walking, but it is what it is and I'll just do my best.


Hope everyone else had a great week and I wish you all a happy, healthy week next week as well.
at July 08, 2009 1 comment:

I managed to run for 25 solid minutes this morning-maybe I've earned a hot dog this weekend :) Seriously, I hope everyone has a fun, safe weekend. It is supposed to be beautiful along the Lake Michigan shore where I am headed and the kids said they wanted to bring their bikes, so maybe we'll do a nice long bike ride along one of the many trails.

I'm very proud of my Team Peach teammates, as we were the shrinkingest (is that a word?) team this week! We'll be moving up that leaderboard and into smaller jeans in no time.

On a fun note-I think I saw some muscles trying to peek out in my strength training class today-yippee! Seeing the number on the scale go down is one thing, seeing actual, physical changes in ones body is even better.

My goals for this week:

What are your goals for the week?

Go Team Peach!
This is my official first week with the sisterhood. I'm very motivated and feel I've done a great job this week with the exercise and counting points. It is all paying off! My weight this week is 162.0 lbs, down 3.8 lbs from last week. Yeah Me! Next week will definitely be more challenging with the 4th of July in there, but I'm hopeful.
at July 01, 2009 5 comments: