This past weekend I decided to forgo my usual, flat as a pancake, 11 mile long run in favor of a hilly 15k race.  Friends have spoken highly of the Kent City Ridge Run 15k and I've never run it before, so I figured, what the heck. It was after I registered that I looked at the course and elevation profiles.  Probably should have checked these out first. 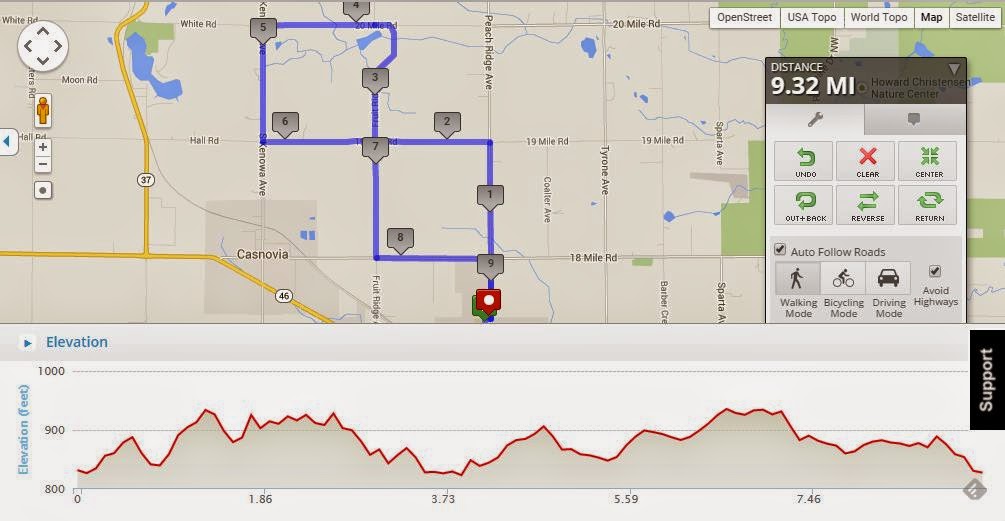 Kent City is about 45 minutes from my house and the race didn't start until 9:30, so I was able to sleep in a tiny bit.  I had my usual breakfast and headed out to "Jill's Hills".  The race starts and finishes at Kent City High School and the school was open before the race, so I had a warm place to wait.  Good thing because it was about 16* Saturday morning. 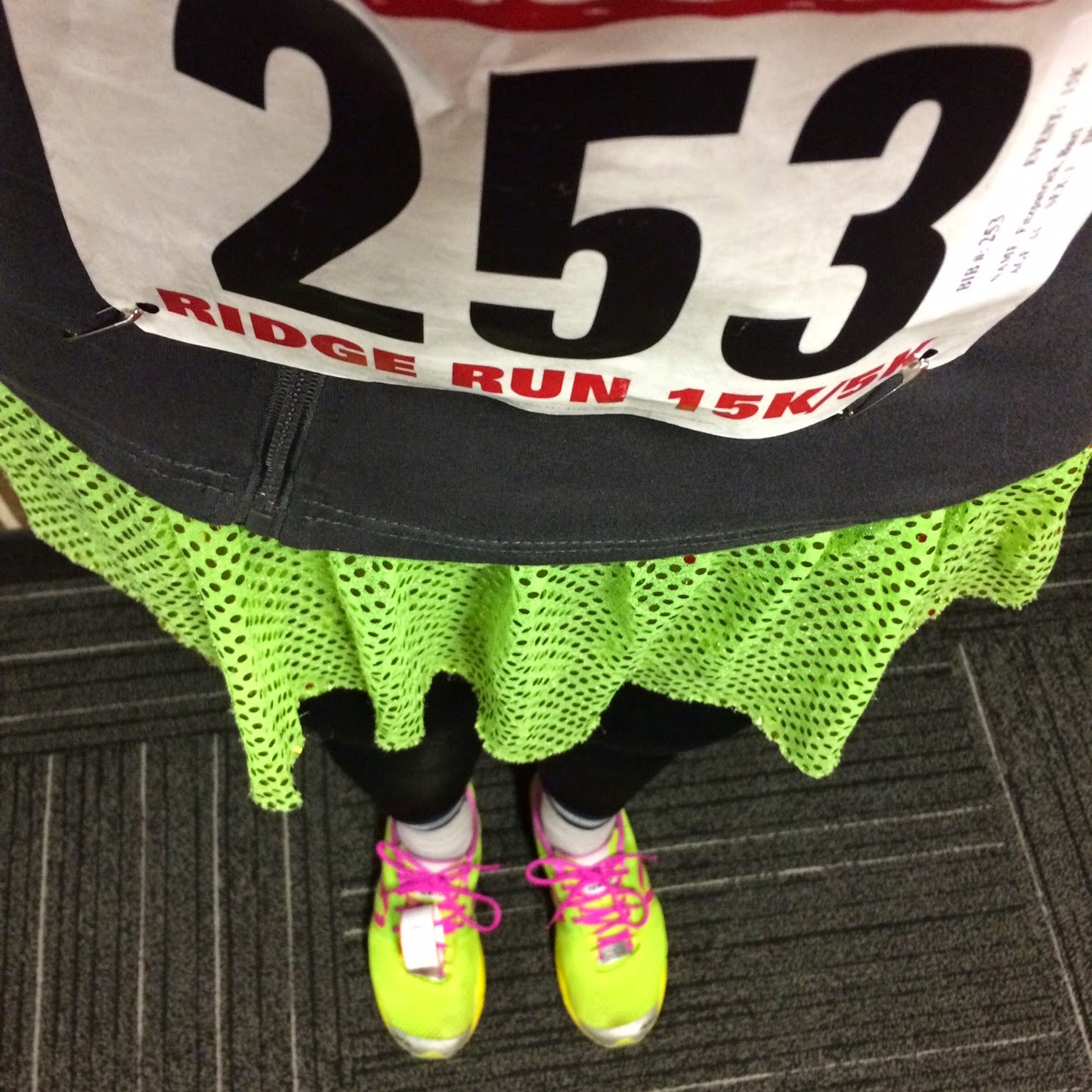 I started out pretty strong considering the race has an immediate uphill as soon as you leave the school parking lot.
Miles 1-3: 10:32, 11:24, 10:50.  The north/south roads of this course were paved and the east/west roads were dirt and gravel, so the terrain kept changing.  This was both a challenge and a weird change of pace.  I wasn't crazy about the dirt downhills but whatever.  At least the views were nice.
Miles 4-7: 11:03, 11:10, 11:05, 11:37.  I wanted to maintain a sub-11 average pace for this race and with the steady uphill in this 4 mile stretch, I saw the average on my watch dip into the low 11's, which pissed me off.  I'd walked a couple times for only a few seconds and was walking through the aide stations, so that didn't help either.
Miles 8-9.3: 10:07, 10:11, 8:36 (pace for last .3).  That nice downhill that started at the end of mile 7 pretty much saved my average pace for this race.  I passed a lot of people in these final 2.3 miles, including a guy, so that felt good.  I still had enough gas at the end to log a sub-9 pace too with the final .1 being uphill into the parking lot!  I think I ran this race very smartly and I felt strong at the end, even if in the middle I felt like my legs were going to fall off and that I was sucking wind. 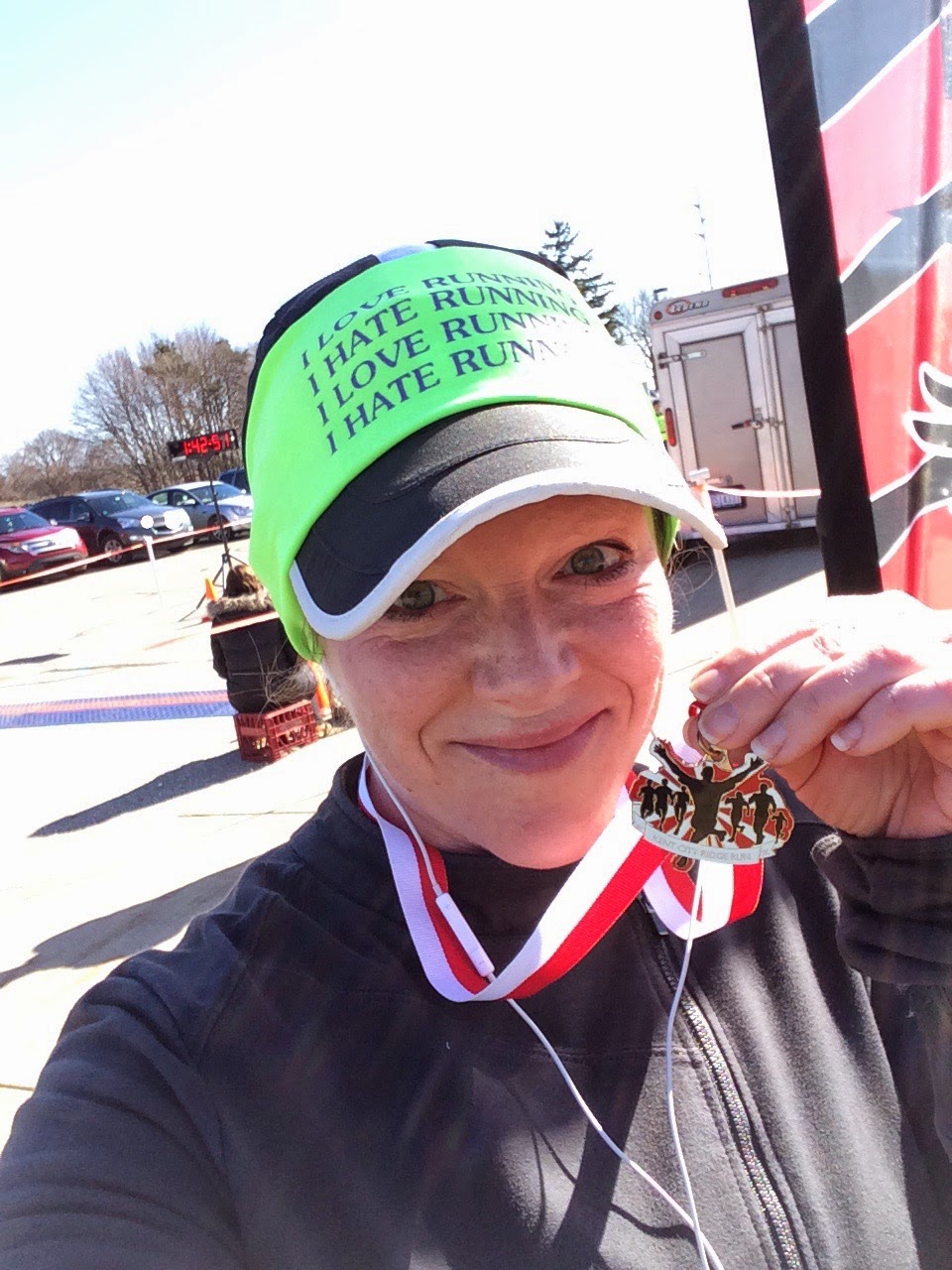 I finished in 1:40:48 with a 10:49 average pace.  I was 11/15 in my AG, 79/115 women and 179/217 overall.  I'm not thrilled with those stats but I am happy with my final time.  This was a training run and I didn't go balls out (unlike in previous years when I've run races as training runs) and my age group is crazy fast.  For reference, the winner in my AG ran a 7:44 pace (finished in 1:11:58) and the top 5 women in my group were all sub-10 average paces. I didn't stand a chance to place much better than I did.  My B goal was to finish in under 1:45 and my A goal was under an 11 m/m pace.  I exceeded both of those goals on one of the hilliest courses I've ever run.  Even with the hills, none of them were as bad as I thought they'd be and I think the varying terrain and ups/downs helped work different parts of my legs.  The race also had a 5k and I saw lots of little kids getting ready to run that one with their parents, so it's a family-friendly event.

For such a small race, the Kent City Ridge Run was a class race.  The intersections were all staffed by EMS and Firefighters from the local fire department and the cutest little girls were handing out water.  While the roads weren't completely closed, the volunteers did a great job of keeping vehicles away from the runners.  Chip timing for a race this small was also a very nice touch. 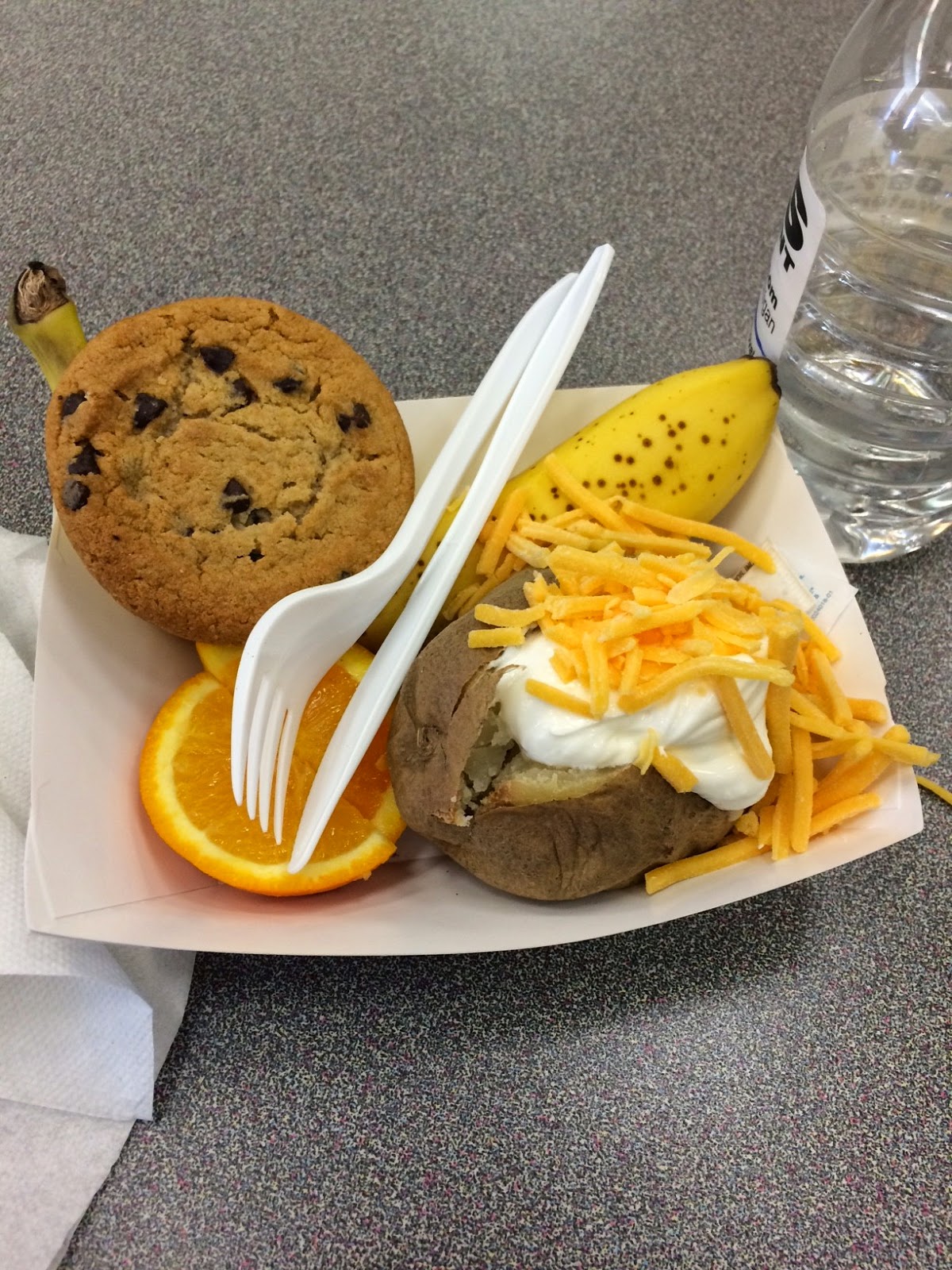 The spread after the race was pretty incredible too.  Seriously the best baked potato I've ever had.  In addition to the potatoes with all the fixings, they had cookies, bananas, oranges, apples, gogo squeeze applesauce, carrots, coffee, gatorade and water.  Super friendly volunteers were feeding everyone and they were printing results off as they came in. 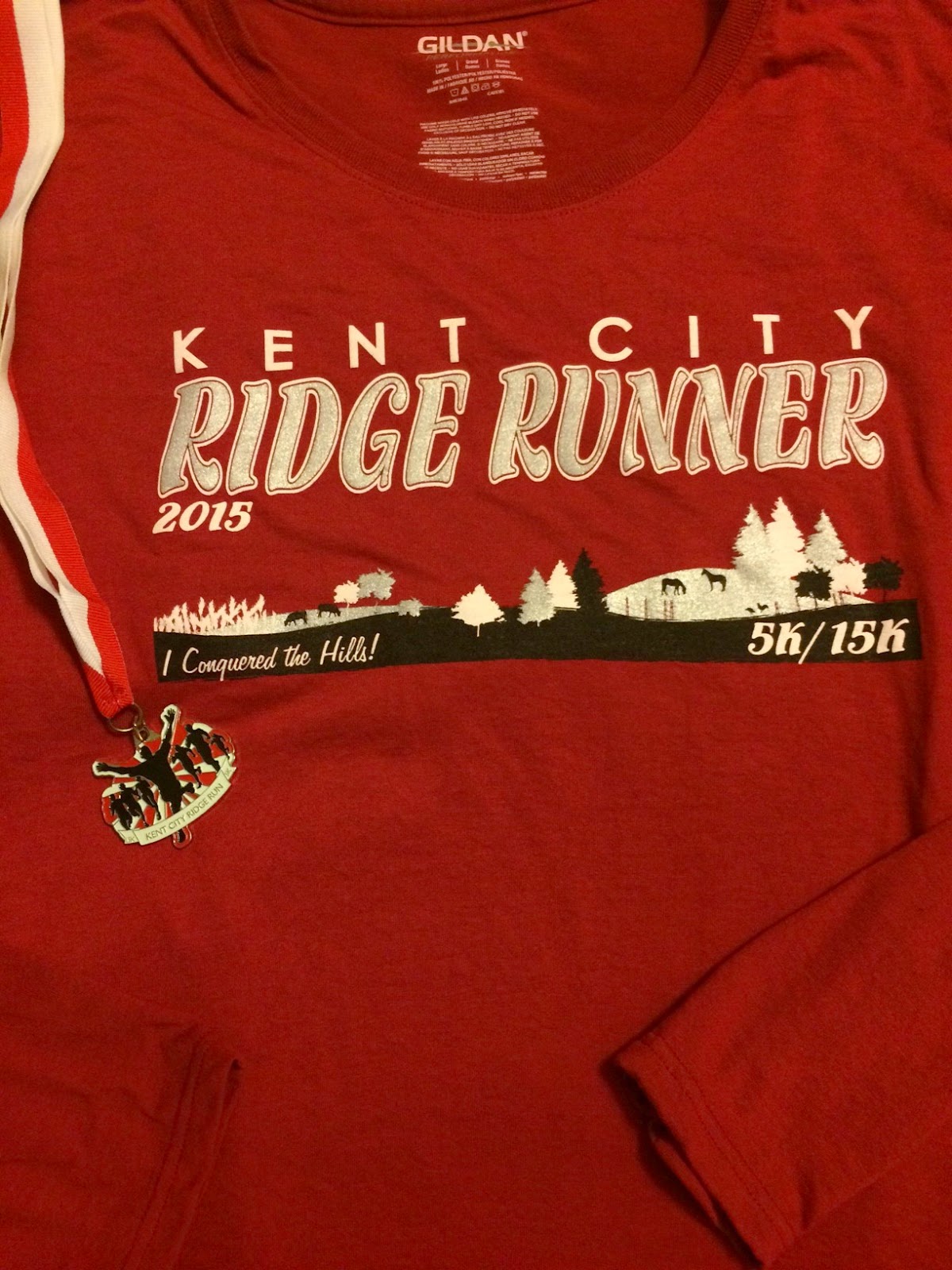 For a race that cost less than $25, I would definitely run it again.  The long sleeve cotton race shirt (not tech like they'd advertised but a softer, gender specific cotton) is really nice. They even had 4 different colors to choose from and today announced on their Facebook page if anyone needed to trade sizes that they had extras.  The little medal is super cute, too, and I wasn't expecting that.  If you live in the West Michigan area, the Kent City Ridge Run is definitely one to put on your list.
at March 30, 2015