Last weekend I laced up my Newtons for my first Garmin-free race, the 2015 Gazelle Girl Half Marathon.  I made a deal with Deb to not wear my Garmin during April and even though she said I could wear it for the race I decided to go into the run blind.  Before I get to the run though, a few other things.

Expotique
This is the 3rd year for the Gazelle Girl and also the 3rd location for its Expotique.  Last year I Woman'd a booth for Another Mother Runner but we could not participate this year due to restrictions put on my Nike (a title sponsor) prohibiting clothing sales.  This year, the expo was held in the field house of our local community college and I really wasn't impressed.  There were very few exhibitors (seemed down from last year) and the only clothing items were Gazelle Girl specific ones from Nike (except for a few shirts from Fellow Flowers and I'm not sure how that was allowed with what AMR was told).  They did have a fun photobooth but really not much else.  I ran into friends right as I got there so that was fun and packet pickup was super easy.  I had paid extra for VIP-tent access and this included a separate table for packet pickup.

Race Morning
I had my usual crappy pre-race night of sleep and woke up to a windy, chilly morning.  This race is only about 20 minutes from my house so getting there is easy-peasy.  I'm cheap so I parked in some free lots about 1/2 a mile from the start and walked toward the beautiful sunrise.  I decided on capris, tank and arm warmers for the race.  Turned out just about perfect.

VIP Tent
Gazelle Girl is not an inexpensive race but fairly on par with other half marathons in the area.  I believe I paid $75 with pre-registration (it was $95 at the expo) and this includes your finisher charm, a decent shirt, and the usual post-race food stuffs.  Prior to the event, a VIP tent was offered, sponsored by Nike.  For an extra $35 we would get a swag bag with water bottle (that my track girl has already claimed), hat and some other food things, a heated tent to wait in, food before and after the race, private gear check, and private bathrooms.  Since I wasn't sure I was going to make it to the expo because of my daughter's track meet, I decided to fork over the extra dough to have a nice place to wait and pee in the morning.  I was pretty sure I wouldn't eat anything before the race but was looking forward to some real food afterwards.  I was also sold on the bathrooms and gear check.

The food was really quite good - muffins, yogurt, granola and stuff for breakfast burritos.  The bathrooms? Not so much.  There was a trailer with 3 nice bathrooms that flushed and had sinks, but this was not enough for the number of people they allowed in the tent.  I used them when I first got there but as we approached T-1 hour until race time, the tent became packed and the bathroom line snaked around to the point I couldn't figure out where it started.  I ended up leaving the tent with 30 min to spare and waited about 27 minutes in a bathroom line to use a port-a-potty.  I got into the corrals just as they were singing the National Anthem.

The Race
I lined up between the 10:30 and 11:00 m/m pacers only because that's where I spotted my friend Jessica.  The race was sent off in waves but it didn't take long to get to the start.  As I said before, this is the 3rd year for this race - it's also the 3rd course.  The first year we had horrible flooding in Grand Rapids and part of the course was underwater.  They changed it the 2nd year I think to prevent that scenario.  This year they changed it again to accommodate a larger field (it was capped at 2000 for the half - the 5k did not have a limit) and changed the race from Saturday to Sunday to make road closures have less of an impact on the community.  I really enjoyed this year's course. 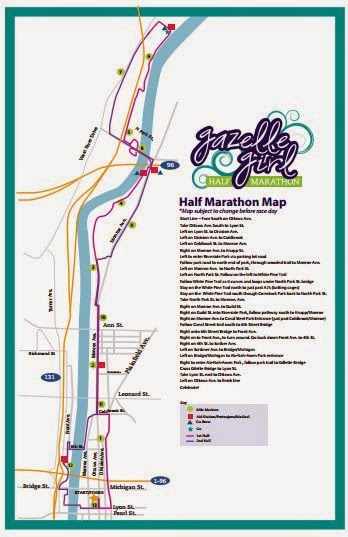 We headed north through downtown and Riverside Park, then up to the 5/3 Ballpark, looped back and came back south.  Most of the course was run on paved trails along the river so the scenery is nice.  Much better than last year's long industrial section. The route started and finished pretty much where the 5/3 River Bank Run 25k will be and downtown Grand Rapids knows how to put on this kind of event.  The police officers were great at keeping intersections safe and the cheer squads were outstanding.  Since this is a women's half, the vast majority of spectators were men and children.  I gave more high 5s than I can count and loved reading people's signs.  As I wrote in my race recap on Daily Mile, my favorites were these two guys whose signs kept changing as they positioned themselves from place to place on the course.  "Free High 5s" turned into "Last Chance for Free High 5s" and his buddy had a sign that said "Beer at the End" at the beginning and "Sorry, I drank all the beer" at the end.  They made me laugh 4 or 5 times during the race.  I also got to see a few friends on the course, including Brian in a dress, and at one cheer station, my friends had Jello shots.  Yes, I really enjoyed that Jello shot right before mile 10 :)  My goal was to run as much of this race as I could and that's what I did.  I stayed just behind the 10:30 pacers for the first 4 miles but lost them when I walked for a gel at mile 4. When the 11:00 pacers passed me at 7.5 I had a little pity party for about 2 minutes, then I literally "Let It Go" when that song came on my playlist.  I knew I was slowly fading but I just kept moving forward.  It was also right around here that I saw the last 2 women walking with a police car following (they would have been about 4.5 miles into their race at that point). Running a half marathon is tough - I think walking one would be even harder and I give those girls major props for being out there.  I only walked through aid stations and around mile 11.5 when I took another gel because my stomach was growling.  Right around mile 12 after the one big hill, I ran into one of my BRFs, Jenn, and we decided to run in together.  When I saw the clock said 2:29 I made us haul ass that last .1 so we'd finish in under 2:30.  We crossed the finish line hand-in-hand and her sweetie got a great picture of us after we finished.

We got our fruit and water and then headed back to the VIP area.  At this point in the day, the heaters probably could have been turned off, but the best part was the real food, coffee, and real-ish bathrooms.  There was no line this time since the majority of the finishers had already finished.  My official time was 2:27:29 (11:14 pace, 214/302 AG, 1367/1981 finishers).  I beat last year's (completely untrained) 2:42:40 so that makes me happy.  I know I'm not in PR shape (would need 2:06 for that) so learning to re-adjust my goals and race strategy was a good thing.

Post Race
Even though I ran this one "for fun" with no real time goals, 13.1 miles is still 13.1 miles and the next day I was feeling a bit rough.  I didn't drink enough water on Sunday and I was rewarded with a killer migraine Monday morning.  I was also pretty achy.  Priority 1: I really need to get these extra pounds back off because my body is getting beat up much more than it should be and my times just keep getting slower and slower.  I also think I need to take a break from the distance stuff after the 25k in 3 weeks.  As of now, I only have a mud run on the calendar and I don't plan on signing up for any fall half marathons.  I think it's time to switch focus.


Will I run Gazelle Girl again?  Probably.  It's local and a well-run event.  I highly doubt I'll use the VIP tent again since it really wasn't worth the extra money.  If they add more bathrooms, then maybe.  As for running watchless, I think for the time being, it holds some merit.  I believe my Garmin will stay uncharged for the 25k with the plan to just have fun and run by feel.  I know I'm not in PR shape for that one so hopefully I can just finish feeling good (as good as you can feel after running 15.5 miles) with a smile on my face.
at April 23, 2015