Until last Sunday, I had no idea how much exercise one could get while watching 18 holes of golf.  As part of the Meijer LPGA Classic 5k, I was given 2 passes to Sunday's final round.  What I didn't realize is the VIP treatment my guest and I were going to receive. (disclaimer: I was given these passes in exchange for participating in the 5k and blogging about my experience)

The event is held in Belmont, Michigan with parking at Rockford High School.  My friend, Kitzie, and I got to the high school in time to pick up our passes and take what I thought would be school buses to Blythefield Country Club.  Nope - they had air conditioned charter buses for all the spectators.  So much nicer than a school bus!

We took the short ride to the course and had time to wander around for a bit before meeting up with my contacts, Annye and Katie.  Right after entering the grounds, we saw these beauties!  There was also a giant Kraft macaroni noodle :) 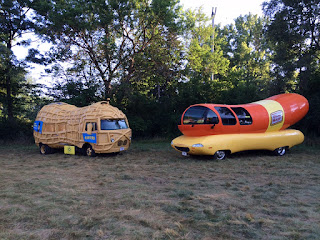 Kitzie and I made our way to the first hole and watched the first few rounds of golfers tee off.  This was the final round and we were assigned to the 9:10 group (the leaders wouldn't tee off until around 10:00).  I don't really follow women's golf (or men's for that matter) but I did recognize a few names.  It was cool to watch Christie Kerr tee off. 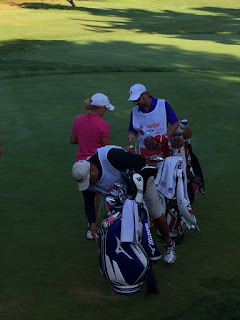 After we met up with Annye and Katie, we were given our special "inside the ropes" passes.  The only give out 3 or 4 pairs of these each day, usually to major sponsors, members of the country club, or contest winners, so we felt very honored to receive them.  What this allowed us to do was to walk the entire 18 holes with 3 of the professional golfers.

We were assigned to Kim Kaufman from South Dakota, Xi Yu Lin from China, and Ju Young Park of South Korea.  As soon as we were escorted to the first tee, all three golfers came over and introduced themselves.  Even their caddies were extremely friendly and welcoming.  A professional photographer snapped pictures but I have no idea how to get copies of them.  We didn't take any pictures with the athletes (yes - they are very much athletes and so are their caddies!) because once the round started they were all business.
Walking right now the middle of the fairway during the LPGA Classic final round was an incredible experience.  Watching their athleticism and power was a highlight.  We were able to listen to the caddies give their athletes suggestions and we even had access to their refreshments at some of the holes.  I know practically nothing about golf but Kitzie golfs on a regular basis so it was nice to have someone explain things to me. 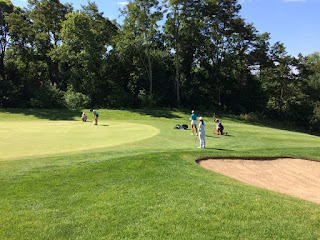 We spent about 4 1/2 hours with the athletes.  Kitzie had her step counter running on her phone and by the end of the round, we had walked over 13,000 steps or a little over 6 miles!  Yes, with all the hills on the course my legs were TIRED, especially after running a fast 5k the day before.  It was an absolutely BEAUTIFUL day for golf and I feel very privileged I got to watch the final round from behind the ropes.

Thank you Meijer, Kraft and the LPGA for a wonderful weekend!
at July 31, 2015