I've been sitting on this race report for a week, trying to decide how best to write it.  Spoiler alert: it wasn't quite the "comeback" race that I'd planned but I finished and that was the main objective.

My midwinter break from school was nice enough to fall on Donna weekend again this year so I started making plans way back in September or October to fly down to Jacksonville and run it again.  It's a perfect excuse to find some warmer weather in February and see friends I only get to see once or twice a year.

There was one problem with my plan...I wasn't running yet.  I had been fighting achilles and shoulder problems for months and was heavy into PT.  But with my PT's (overly ambitious, IMO) blessing, I was told to start "training".  I couldn't run more than a couple minutes at a time until around the end of November so I worried I would never be able to get my mileage up enough to complete 13.1.  Every week from the 1st week of December until two weeks before the race I ramped up my long runs.  By the beginning of February, I'd been able to complete two 10-milers using a run/walk strategy so I figured I was good to go.  Then the week before the race hit me with horrible leg cramps at night and I was seeing the chiro and a massage therapist literally the day before I flew to Jax.

Not in the plan at all.  Add to this a 3 hour flight delay in Chicago and I was worried I wasn't even going to make it to the expo to register.  (Because weather in the Midwest in February is quite unpredictable, I didn't register in advance in case I couldn't make it there - I never anticipated multiple mechanical problems to ground us.)  Thankfully, I made it to the expo with about an hour to spare, rushed in and registered, and then headed to my hotel to chill before meeting friends for dinner.
Just a few days before the Donna, I was chatting with my friend Krissy about the race.  She decided rather last minute to run the half marathon and we made plans to run together for as much as we could.  Krissy is a freaking ROCKSTAR for running a half only 9 weeks after having her adorable baby girl.  I think I was barely functioning at that point.
I was up bright and early Sunday morning after just kind of throwing my gear out the night before.  I headed to the race in plenty of time to hit up the port-a-potties and meet up with Krissy. It was pretty chilly race morning - in the high 30s - so I was very thankful for the cheap Walmart jacket and my daughter's old track sweatpants.  Those suckers stayed on until about 5 minutes before the start.  Krissy and I discussed race strategy as we hung out in the ambassador's tent.  We were both running Garmin-free but I was planning to call out our intervals (1/2 mile run / 45 second walks) as they played through my headphones.  Our goal was somewhere in the 2:30-2:40 range.  We both agreed if either wanted to change up this plan and do their own thing at some point, we were completely cool with this.

Even with my lack of training, I was feeling pretty confident in my ability to complete the race using the intervals I'd set up.  My two 10 milers went well and our loose time goal should have been very attainable.  The race is self-seeded so after one last stop at the potties, we positioned ourselves toward the 2:40 pace group.  Krissy found a few other friends in the corrals so we chatted a bit before the start.  Off went the warm-up gear (it was in the 40s at this point) and off we went.

The first few miles flew by as they typically do when you are having fun and chatting.  BRFs are awesome for that :)  We were keeping to our intervals and it wasn't too crowded, so moving to the side for walk breaks was pretty seamless.  I saw one of my friends around mile 5 and grabbed a quick swig of beer.  Yep, that's how I roll.  I was feeling pretty good although noting I was feeling a bit more winded than usual - probably because I was talking a lot and I rarely talk while I run.  (A peek back at my splits in runmeter also revealed we were averaging about an 11:15 pace with run segments in the low-10s through the first 7 miles or so, which was faster than I'd been training by about 30-45 seconds per mile).  Maybe this was the start of troubles to come.

I ducked into a port-a-potty at mile 6 to deal with a wardrobe malfunction (ie, chafing boobs are the devil but given the theme of this race, I'm thankful to still have them).  The wind from miles 5 to 7 was straight into our faces and it was really kicking my butt.  I was so thankful to hit the half/full split at mile 7 so we could have the wind at our backs for at least a couple miles.  We even got a hug from our friend, Marcia, who I didn't think we'd see.  Around mile 8 we ran into another one of Krissy's friends who was spectating and had the most delicious brownies.  We both enjoyed a brownie and continued on our way. 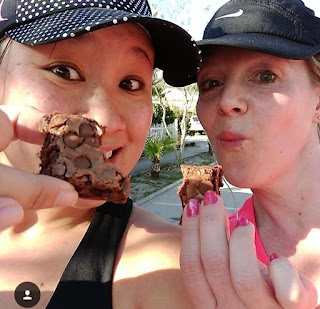 Having not run with my Garmin, it's hard to remember some of the "stops" except for when runmeter showed stopped time but I know it was around this point that I mentioned to Krissy how my calves and shins were starting to cramp up.  After the bad night cramps the week before, this was one fear going into the race that maybe I should have taken more seriously.  We saw my friend again at mile 9 and someone at the house gave me pickles and pickle juice.  Bless that sweet girl.  Side note - the neighborhoods go all out for this race and there were people grilling and cheering and having a 13.1 mile block party.  It's one of my favorite parts of this course.  The pickles helped a little with the cramping but I was definitely slowing down and starting to hurt.  Just before mile 10, Krissy was feeling amazing and I gave her a hug and sent her on her way.  (Girlfriend crushed her first postpartum half with about a 2:30 finish!)
The last 3 miles of this race are up and over the bridge on Butler Blvd.  With each attempt to run from about mile 10.5 on, my calves and shins cramped more and more.  I even stopped at another bathroom on the bridge because the pickle juice was not making my insides happy.  The wheels had fallen off the bus.  I talked to my friends to let them know what was wrong and that I was definitely not finishing in 2:30. I kept trying to run but it wasn't happening.  It was as if my legs had a mind of their own and at times I was running and walking on the sides of my feet or with my feet turned at a weird angle because the muscles were so cramped.  I had a bit of a cry at the top of the bridge (ok, it was full on sobbing) but at least the view was nice.  I also got to see the winners of the men's and women's races go by me so that was cool.
I was so close to calling my friends to tell them I couldn't finish but I knew I didn't come 1200 miles in a plane and 12 miles on foot to quit with a mile to go.  I continued my 3 mile death march and when I saw the finish line, I told myself to run.  It' was a 10th of a mile, for God's sake! Surely I could suck it up for a 10th of a freaking mile.  Nope.  My legs didn't get the message.  It was the weirdest sensation ever and I must have looked like one of those deer who are just born and trying to make their legs work.  I stumbled and cramped and I almost fell within yards of the finish line.  Several times.  I've never had this happen before and I was in so much pain and really confused.  I saw my friends just past the finisher shoot and I'm very thankful for Wendy literally holding me up.  She kept telling me how proud she was of me as I hung on her and cried.  For the first time ever, I was put in a wheelchair and taken to medical.  I was a bit pissed my friends did that but it was probably for the best because I couldn't even stand much less walk.  The medical folks massaged and iced my calves and gave me some gatorade.  After I felt like I could walk again I met up with my friends and they took care of me (ie, found me beer).
I'm still trying to figure out what happened and why my legs cramped like they did.  My friends suspect the weather may have had something to do with it.  It had probably moved up into the mid to high 50s by the end and with the winds I never felt hot or realized how much I was sweating.  Maybe I didn't drink enough or my calves were more injured from the cramping the week before.  It's a week later and I'm still having leg cramping issues so who knows.  Hopefully it doesn't continue.
While this was my worst road half ever (2:51:59 - a 13:08 ave pace) it was still a finish and a finish that 4 months prior I didn't think I'd even be able to start.  One of my friends called this "triumphant". I'm not sure I'd go that far but my view is a bit skewed still.  The best parts of this race were the sunshine, having my friends there and being able to run a solid 10 with Krissy before the shit hit the fan, all while supporting a great cause.  Any day you get to run in the sun with your best running friends is a good day in my book.

Next year is the 10th anniversary of the 26.2 with Donna so I'd LOVE to come back for a third time.  Heck, anniversary or not I want to come back.  Maybe if the stars align you'll see me in Jacksonville next February.  Want to join me?  Registration starts this spring :)
at February 20, 2016