Tuesday, Oct 12, 2010 marked the one year anniversary of a little post called Exposed over at Eating Journey.  At the time, I was relatively new to blogging and the Sisterhood of the Shrinking Jeans and really didn't give the post much thought.  In fact, I don't even know if I was really aware of it.  However, my twitter community was abuzz with talk of the anniversary of this post.  Tweets flew back and forth between myself, Brooke, Kirsten, Karena, Beki, Thea, Melissa, Lisa, Jen, ... I don't even know who all was tweeting at this point. All I knew was, I was seriously contemplating putting my bits and pieces out there for the world to see.  OMG, could I actually do that?  I've posted before/after pictures before, but with slightly more clothing!  Now, I never had any intention of nekkid pictures - I'm not THAT brave - but a bra and panties?  The whole point of Exposed and the reason SO MANY women and men have joined the Exposed Movement was to stop hating our bodies and start celebrating them!

Nobody or no BODY is perfect.  Not even the Victoria's Secret cover models have perfect bodies.  They have airbrushing and photoshop.  Our bodies tell a story.  Maybe you have a few scars.  Maybe your dog bit you and you've always seen the scar that no one else ever notices.  Maybe you've given birth to a baby or two.  Maybe you have freckles that you say you hate but you secretly love because they really are cute. Maybe you've lost almost 30 pounds and you have 5 or 10 pounds of extra skin hanging around and your girls have completely deflated.  Maybe you've slacked on the strength training and even though you are lighter you aren't as toned as you were a couple months ago.  No matter what "maybe" is you, that "maybe" makes you a beautiful person designed by God.

God doesn't make mistakes.  YOU are not a mistake.  You are beautiful in HIS eyes and it's time you recognize your beauty for what it is.  Real. 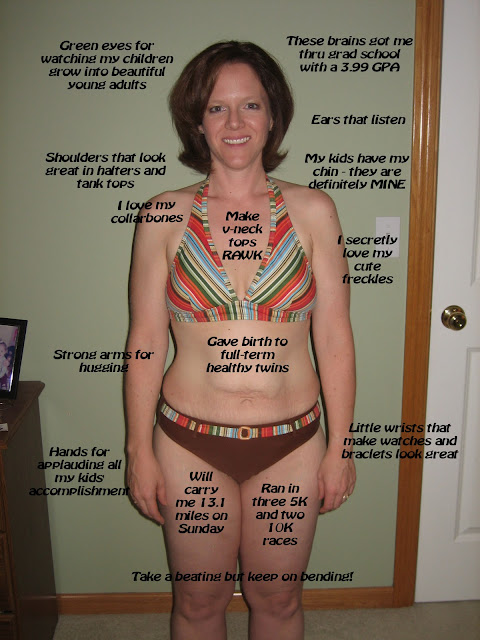