Training Tuesday: When is a fail a not fail?

I was having a discussion with a couple of my friends on Twitter this weekend.  We were talking about how many miles we each ran in 2014 and we all had an impressive number of miles.  1500, just shy of 1000 (and she'll hit it by the end of the year) and then my 771.  Now, 771 miles running in the first 11 months of the year is nothing to sneeze at - that's like running from my home in Grand Rapids, Michigan to Atlanta, Georgia.

But when you realize you're so close to hitting 1000 miles and knowing there is no way you can get there, it stings a little.  It doesn't help that I only ran 34 miles in November and 8 miles in January.  Looks like both ends of this year are going to suck because I'm not running 229 miles this month. 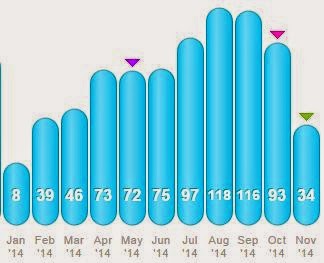 They were both quick to point out my killer marathon PR this year - I'm very proud of that - but I also set a goal to run a sub-2 half.  I never even came close and didn't even try.  I only ran 3 half marathons this year and my best was 2:17. It wasn't even close to a PR.

So, was the year a fail?  I only met 1 goal - going sub-5 in the marathon. I crushed that by going 4:52.  Hitting 1000 miles running was never written down as a goal, but that's always a good number to shoot for.  I didn't even come close to my sub-2 goal.  I have friends who believe I have it in me but setting both goals in the same year was probably a really stupid idea.  I didn't do nearly enough speed work because I spent half the year training for distance.

This is supposed to be week 1 of River Bank Run 25k training but since I haven't registered yet and I've been too sick to run, no training to report.