Today I'm writing my Thankful Thursday post a day late because I didn't get the material until late last night :)  This week I'm giving thanks that my boy has found his niche in high school.  He's always been involved in music (and was the ONLY freshman to make the top jazz band at his high school a couple weeks ago!) but he's now found a love of theater.
Yesterday marked D's acting debut in The Taming of the Shrew.  He played 3 roles: a servant, messenger, and sheriff.  I knew he had some lines, but I was surprised by how many he actually had.  He did a great job and I'm so proud of him. 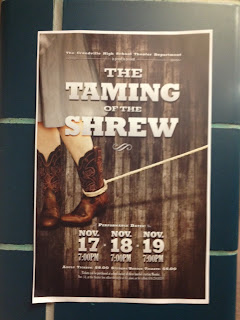 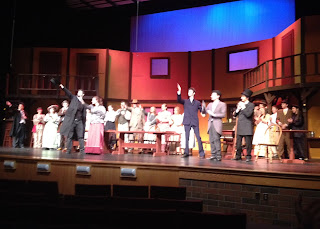 I was in choir so I was "forced" to be in a bunch of musicals in high school, but I never had any speaking parts (way outside my comfort zone-to this day I panic at the thought of public speaking).  How about you?  Were you ever involved in theater in high school or college?
at November 18, 2011