The Fred Relay: a #racereport

Where does one begin to recap one of the best adventures ever? How do you describe the feeling of pride and elation when you realize you and 9 of your running buddies just ran 200 miles in 33 hours and 29 minutes - a 9:53 average pace? Is it possible to convey how I still haven't processed running 17.7 miles in under 24 hours, slightly broken, on poor nutrition and little sleep?

I don't think I really can, but I'll do my best.

Bottom line? Stop Looking At My Caboose 2 kicked some serious ass last weekend! I am so proud to have been included in this group and in crossing that finish line 33 1/2 hours after I started us off as runner number 1 at 6:30 Friday morning.

I should back up a bit though. This adventure actually started several months ago when my friend Jenn suggested I join their relay team. Me? Run a relay? Live in a van for two days? After thinking for about 5 minutes I decided to go for it. We had enough runners interested to make 2 teams so our captains did much of the planning together and we had a few fun meetings to go over the details.

Thursday night, we decorated my van and took part in a little carb loading.

I drove home that night (with my van all pimped out) into one of the most beautiful sunsets ever. I took this as a very positive sign!

It was awesome to run with Tim for a bit (he was a part of SLAMC1). The 5 of us who started chatted a bit and then the tall guy in grey who was running the first 3 legs & the girl in yellow took off. I kept the girl in my sights but never caught her. No worries. I got to the end of my leg, smacked Jenn's ass & she was off! We decided ass slaps would be more fun than a baton :)
We were having a great time hanging out and getting to each exchange point. We cheered for everyone. We rang cow bells.  After van 2 took over, Mike, Glenn, Jenn, Andi and I got some breakfast (lunch for me since it was around 11 am) and then headed back out to cheer some more for van 2 and the other teams.

We made it to the Reed City, where I would take over again, a few hours before my next run. I tried to lay down and rest but I never really slept.  I did some foam rolling and cheered other teams coming in.

At 4:51 pm, it was my turn to run again. There was a big difference between running at 6:30 am and almost 5 pm. SUN and HEAT. This 7.1 mile run (an out and back section) was brutal. I encountered loose dogs and a snake - 2 of my biggest running fears - during this leg.  I also ran out of water 4.8 miles in and did a lot of walking on the way back. The only things keeping me going were texts encouraging me, the breeze that kicked up, a bit of shade, and high 5s from runners heading out on that leg. I finished my 7.1 in 1:12:29 (a 10:16 pace) which blows my mind since I walked so much in the 5th mile! My teammates quickly got me Gatorade & put water bottles on my neck to cool me down and before long I was back to my chipper self. Even though the route was insanely hot, it was also beautiful.

Several legs (or "spurs" for this race since it was railroad themed) of the 200 mile course were 2-track, gravel and grass. Thankfully I didn't have any of those spurs.  I'm not sure how I would've handled running on anything other than pavement.

Night began to fall and we got our safety gear ready. Jenn finished our second stint just before 11 pm by running around Lake Cadillac.  The relay was half way done!

We went in search of dinner & beer, then headed back to Reed City where I would take over again sometime before dawn. I started my 3rd spur at 4:44 am after attempting a couple hours sleep in the van. I have to say, this was by far my favorite leg to run. The number of stars in the sky was simple astounding. I wanted to take my lights off and just stare at the sky, but instead I just ran and watched Orion rise over my left shoulder. The first couple miles were SLOW from being cramped up in the van and having already run 11 1/2 miles, but I managed to chase a girl down & I got my first road kill 4 miles into my 3rd run by hitting a 9:35 pace! I could hear water running somewhere too & the run was so peaceful. Just my music, the sounds of the night and a few other runners blinking head and behind me.  I finished my 6.34 mile run in 1:04:49 - a 10:13 pace. I handed off to Jenn again and Glenn got a couple pics for me.

I was one very happy little runner to get that beer before 6 am! It took me a few hours before I realized I had run 17.7 miles across 3 runs in under 24 hours at a 10:06 average pace!  I'm still trying to

The sun finally came up and Glenn took over, then Andi ran her last leg. Andi slapped Mike on the ass to send him off on his final run and off he was - that dude is crazy fast! After running over 12 miles on his last leg (Mike did 2 back to back), van 2 took over again and SLAMC2 van 1 was DONE!
We drove down to cheer on van 2 a bit more and then headed back to Comstock Park and the finish line.  We might have celebrated with more beers and a Bloody Mary while we waited for van 2 to finish.  But that's just how we roll. 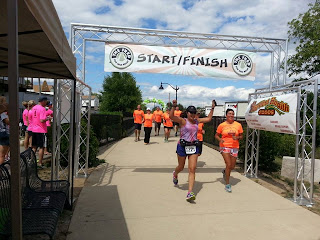 Getting to run across the finish line with my team was such a thrill. I still can't believe we ran how much we did and managed to come in 7 seconds per mile faster than predicted (that's 23 minutes over the course of the race!).  I even amazes me how close to pace we all stayed!
I can't wait to run this race again next year - or maybe another relay.  I thought I would hate this experience but I really loved it.  Having such a great team and supportive van mates made this adventure truly special.