Oh my goodness, where do I even begin to describe/recap my first full marathon?!?!  This is something I've been training for since June, but really, all the running I've done in the past 5 years or so (when I said I'd NEVER run a marathon) have led up to this moment.

The day started out like most race mornings.  The alarm going off WAY too freaking early and me trying to down some food and fluids.  I got all dolled up in my My Race Ragz custom t-shirt and purple Team Sparkle skirt.  I may not feel great running this marathon, but you better believe I'll be adorable doing it! 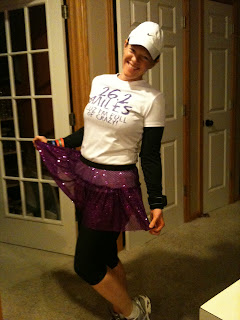 We left the house a little after 6 with the goal to be downtown around 6:30 so I could find Pete and Megan (never did find Keith or Steve), use the bathrooms 465 times, and relax a bit.  The weather driving downtown was abysmal. 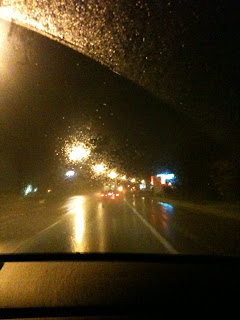 My hubby, Mike, and dad came down to see me off.  Dad gave me a kiss and then ended up waiting in the car because the weather was still a bit rainy, but Mike was there and video'd my start. Thankfully, the real rain had stopped and we just had some sprinkles for the start of the race.
Miles 1-4 take us through a loop around the downtown Grand Rapids area.  At the beginning of the race, I started chatting with a girl named Jessica who was also doing her first marathon.  She wanted to try and maintain a 12 m/m pace and that's what I was hoping to start out with.  We chatted and kept trying to reign each other in.  Around mile 2, I saw my friends Angie (who BQ'd at the Chicago Marathon last weekend - ROCKSTAR!!!) and Joe with a sign that said, "If it was easy, everyone would do it". So totally awesome!.  We made it through town and headed south toward the outer reaches of the course. Thankfully, the rain had stopped and we had cloudy skies with just a little bit of wind. (Splits: 11:36, 11:37, 11:47, 11:41)
Miles 5-10 head us out into the reaches of the Grand Rapids park system.  We ran through Butterworth Park (known to some as the Serengeti) and I took a potty break at about mile 6.5.  I rounded the corner at mile 7 and was shocked to see Mike, Joe and Angie here!  It was a great boost (Angie's sign said "You know you want me" with a picture of the marathon medal - um YEP, I did!) and I gave everyone quick hugs and kept on my way.  There's a pretty steady climb from miles 5 to 7 and again from 8 to 9 and my legs were starting to feel the pain.  At mile 10, we headed into Millennium Park. (Splits: 11:36, 11:41, 12:19 (potty break!), 11:05 (extra energy from seeing friends & fam?), 11:39, 11:25)
Miles 11-13 are run around the lake in Millennium Park and then along the north side of the Grand River.  At this point I was starting to walk some and my legs were feeling really tired.  I was pretty much abandoning my original time goal (which in all honesty, was too ambitious to begin with).  I've never run the trails here and it was absolutely beautiful.  I go to that beach in the summer, but had never seen it from the other side before! 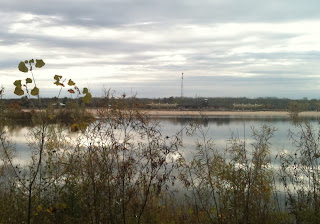 Just before mile 12, at the top of the steepest hill on the course, was my friend Mel, with a sign that read "Run Hooker Run" (inside joke).  She made me run up that hill to give her a hug! 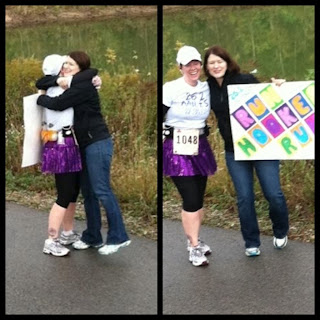 I came out of Millennium Park and headed toward Veteran's Memorial Parkway (which is part road/part trail system).  As I came upon the aide station just past mile 12 I heard "Mrs. F!!!!!"  It was two of my students who happened to be working the station!  OMG these two girls absolutely made my day when they screamed my name and ran up to give me a hug.  One of their moms was there too and I got a giant hug and a "get moving" from her.  This was one of the biggest highlights of my race.  When I hit the 1/2 way point and saw my time was around 2:35, I knew, feeling as tired as I was, that I was not going to finish in under 5 hours.  Seeing the girls just before this and remembering Kirsten's advice to "enjoy the miles" helped me relax and not stress about the time anymore.  I knew it was going to be hard, but I'd finish the race.  (Splits: 13:14, 11:32, 11:32)
Miles 14-20 are essentially an out and back portion run on the Kent Trails system.  Just before mile 14 you cross the river and begin running along the south bank.  I'm familiar with the roads from doing so many training runs (plus the River Bank Run uses this too) so I was looking forward to this part of the course.  Also, because it's an out and back, I was able to see many of the speedy runners and saw my friend Pete for a few seconds.  Right around mile 15, I also saw Angie, Joe, and Mike again (oh, and Murphy the dog was with them too!).  I grabbed some pickle juice, got hugs and kisses, and kept on my way.  To date, my longest race was the RBR 25k (15.5 miles).  This section was very tough mentally.  I was still running quite a bit, but my legs were really starting to hurt.  All the runners coming the other direction motivated me to keep moving, and that's what I did.  At about 17.5 you loop around and head back the way you came.  I was tired and walking a lot.  I came back to the pickle juice station and there was Angie.  I started to cry and she told me to STOP and keep moving and ran with me.  She said you don't get to mile 18 in a marathon and give up.  At this point, run-walk-crawl-finish.  She was headed to her son's basketball game but would talk to me later.  I kept plugging along, definitely walking a lot more than I wanted to (my legs were starting to cramp up, but the pickle juice seemed to be helping).  I hit the mile 20 sign and realized I was headed into uncharted territory but I really didn't feel that bad. I tweeted: "20 mile warm up complete. Time to run (using that term loosely) a 10k.  I've done tons of those. Right? Also, can't wait to read your tweets."  When I tweeted at miles 15, 18 and 20, I saw how many mentions I had from my friends all around the country (world even) supporting me and it lifted me in ways you guys will never know.  (Splits: 12:03, 12:28, 13:11, 12:39, 12:37, 14:39, 12:58).
Miles 21-23 were very tough for me mentally and physically.    I hit the mat at 21 and then looped back around and back across the river onto Veteran's.  There weren't many people out here and it was pretty lonely.  I worked to run at least a 1/4 mile at a time, but even this was getting tough.  I kept looking at the wristbands I was wearing, with so many of my supporters/friends names written on them.  I could do this.  At mile 23 I tweeted "23 done. Just over a 5k to go.  And the sun is out!"  I called my daughter to let her know where I was. Just past mile 23 I saw Angie.  Here I thought she had gone to her son's game, but no.  She was going to get me to that finish line no matter what. (Splits: 13:28, 12:42, 13:09)
Miles 24-26.2 Angie and I headed back into the Serengeti and this time it was up hill.  Angie encouraged me to run by pointing out targets: an aide station - where I saw my friend Mark from church & got a hug, an American flag, a runner to pass.  You get the idea.  We snapped some photos. 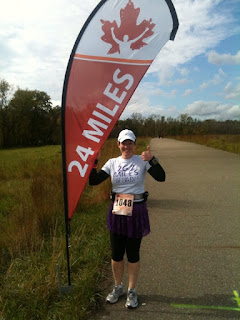 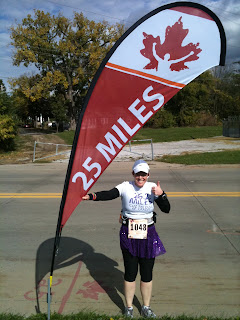 The sun had come out and it was getting warm.  But I only had a mile to go! The wind was also picking up, but thank goodness it wasn't like Saturday's 30 mph winds!  Angie ran with me until we could see the finish line about 1/2 a mile in the distance.  She told me she'd see me on the other side and was gone.  In the last 1/2 mile, I saw Mel again.  She ran out and gave me a big hug.  Then, with less than a 1/4 mile to go, my kids joined me.  They gave me high-fives and said they wanted to run with me to the end. 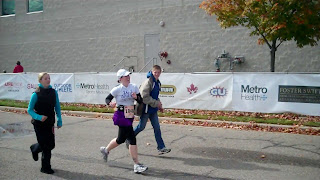 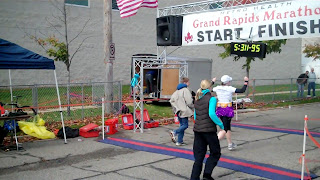 I crossed the finish line with my children on each side of me (actually beating my track star daughter!).  My dad, Mike, Joe and Angie were yelling for me at the fence.  The announcer read my name.  At the finish line, I saw my friend Judi (who is on staff with the Grand Rapids Marathon). 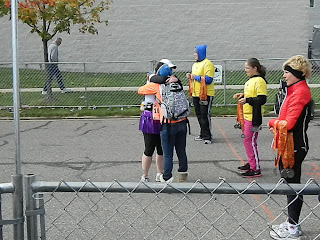 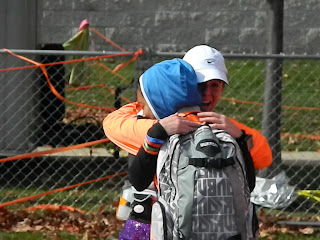 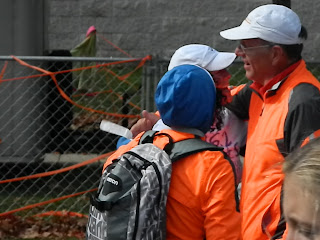 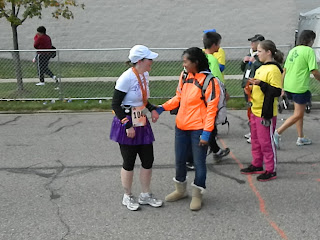 I held onto Judi and we cried.  Then I got a hug from race director Don Kern (he hugs EVERYBODY who crosses!). It was so awesome to have her there at the end because she was one of the first people who really encouraged me to go outside my comfort zone and sign up for this marathon.  She even got a medal from a volunteer and hung my medal around my neck.  I Am A Marathoner. Cue more tears. 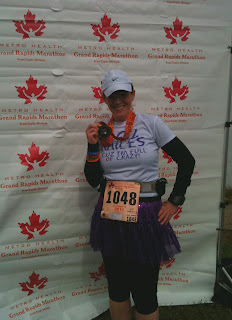 I wish I could remember what songs were playing through my earbuds at different points because so many times, the song that shuffled in was exactly what I needed at that moment.  I know I had "Firework" at the 5k mark and "Lose Yourself" as I entered Millennium Park.  "Don't Stop Believing" played 3 times during the race (3 different versions - 2 Glee plus the original).  I tried to remember what some of the random signs were along the course, but other than the ones my friends made, I really can't remember any.  What I remember most is the feeling on accomplishment when I crossed that finish line.  That, and knowing I had so many friends and family cheering me on, both IRL and through twitter and facebook.  I couldn't have done this without all of your love, support and encouragement.