Since I was on vacation last week, I'm combining weeks 10 and 11 of training today (and let's face it, the "training" while on vacation was minimal at best so it doesn't warrant it's own post).  Here's how it all played out:

Week 10 Build/Recovery
Monday 7/9/12: Planned Rest - Completed Rest
Tuesday 7/10/12: Planned Run 0:25/Strength 0:30 - Completed Run 0:35 min and about 3.4 miles. Stopped and took a break at the midpoint that wasn't included in the time, plus my app didn't record in right so the data is a total guess.  Not sure what happened with strength training, but I didn't do it.
Wednesday 7/11/12: Planned Swim 0:25 - Completed Swim at Lynn's Lake 0:29 minutes (the OCD in me is a little perturbed that I didn't keep swimming for another minute)
Thursday 7/12/12: Planned Bike 0:40 - Completed Nada.  I spent the morning cleaning house before I hit the road for vacation.  We'll call vacuuming "cross training".
Friday 7/13/12: Planned OFF - Completed many hours of walking around the memorials in DC. This was my favorite picture of the night and I'm not even sure which memorial it is. Sad, huh? 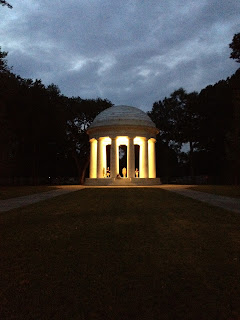 Saturday 7/14/12: Planned Swim 0:25 - Completed An awesome meetup with 4 of my best girls.  We spent the day at the National History Museum laughing and catching up, while trying to keep track of the 5 children we had with us.  You'd think the 1:1 ratio would have been easy - it wasn't! 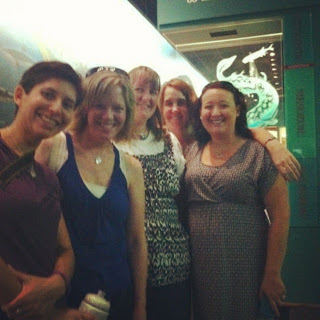 Week 11 Peak (oops!)
Monday 7/16/12: Planned Rest - Completed more walking.  I think this was the day I went to the National Archives (where photos are not allowed) and then the American History Museum. Does anyone know if there is an easy way to tell when photos on your camera roll were taken because I feel dumb when I can't figure it out. 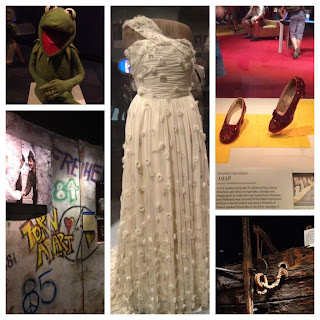 Tuesday 7/17/12: Planned Swim 0:30/Strength 0:30 - Completed a bucket list watchless run around DC :) 1 mile warm up/cool down walk between the Metro and Marine Corps Memorial, then about a 4.5 mile run/walk from the Marine Corps Memorial, past Arlington Cemetery, along the Potomac, and out to Roosevelt Island and back.  It was hotter that Hades and mentally I really struggled with feeling like I "needed" to take walk breaks, but the scenery was awesome. The bonus to this run was running into a very friendly runner before I left who clued me into a ceremony that was to take place at the Marine Corps Memorial that night.  I got to see the Marine Corps Drum and Bugle Corps Marching Band and the silent drill team.  Mostly I took video to show the kids when I got home. 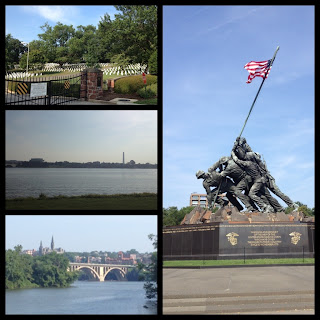 Wednesday 7/18/12: Planned Run 0:30 - Completed a 3+ hour drive to meet up with Kirsten at the beach! On the way I stopped at Dogfish Head Brewery for lunch and had probably one of the best crab cakes (not to mention the Namate Belgian-style white beer) that I've ever had.  ZOMG! 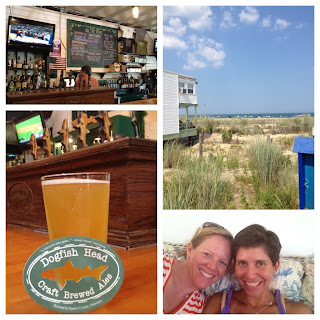 Thursday 7/19/12: Planned Swim 0:30/Strength 0:30 - Completed Run/Walk 0:40. Kirsten and I got up early (after a night of booze - awesome pre-run strategy) to attempt 3 miles.  I think she could've done it.  I crapped out after 1.5.  We walked and had a great talk on the way back to the beach house. Then we spent the morning on the beach (that's her dad in the picture watching the ocean - isn't he so cute?!?) and were treated to a storm and DOUBLE RAINBOW that night! We also headed to the beach at sunset for a bonfire and s'mores.  YUM! 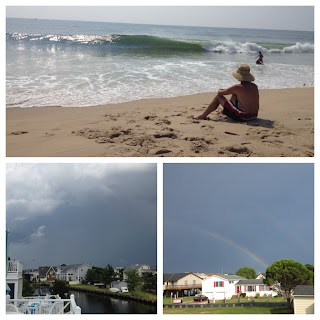 Friday 7/20/12: Planned Rest - Completed 0:30 min Atlantic Ocean Open Water Swim :) The waves and dark sky were insane and for a lot of the swim I felt like I was on some kind of weird aquatic treadmill because I'd look up and realize I hadn't moved, even though I'd been swimming. The day was capped off by more beach lounging, a trip to Ocean City, MD for Thrasher's fries, and a few more beers. 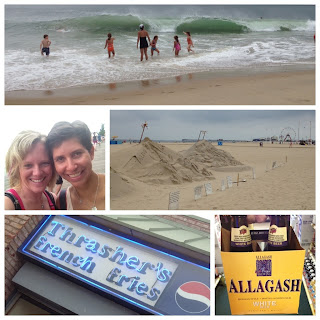 Saturday 7/21/12: Planned Bike/Run Brick (1:05/0:20) - Completed a long-ass drive to a hotel just outside Pittsburgh through torrential downpours (um-the Bay Bridge is scary on a GOOD day!), with a stop in Baltimore to have lunch with my friend Meg at a funky little place called Papermoon Diner. ZERO exercise unless you count sitting on your ass for almost 12 hours. 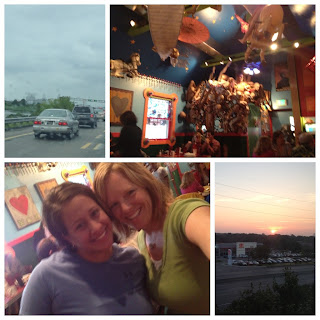 Needless to say, I will be repeating week 11 of tri-training since my race is in 3 weeks (eeekk - technically less than that now!) and I need to be more prepared than I am.  The plan I've been following has a 2 week taper, which seems a bit excessive for a sprint tri, so I'm going to cut out one of those weeks.  It'll work itself out. I hope.

Overall, I didn't do too bad on fitting in workouts over vacation.  I actually completed 3 official workouts which is much more than I would have done 5 years ago on vacation.  Plus, if you count all the walking around DC, there was even more.  Sadly, the scale was not too kind to me yesterday morning (up 2.5 pounds I think), so I am getting back on the bandwagon because my weight before I left for vacation was bad. Now it's even worse.  Oh well, I had an amazing time and got to spend a lot of it with some of my best friends.  What more could I ask for?