Tri Training Tuesday will return next week.  Instead, I'm celebrating my "long" run from last week still today :)  On Saturday, I completed my 4th ever 10k in beautiful East Grand Rapids, MI - the Reeds Lake Run 10k.  Even though this was a local race and in it's 35th year, I'd never run it before.  Crazy, I know.  In fact, I hadn't even PLANNED on running it at all, much less RACING it, until some of my friends on FB badgered encouraged me to sign up ;)  I registered on Monday or Tuesday I think and by Friday, I didn't even want to run.  Mentally I wasn't feeling it and my sleep had been shit, so I wasn't hopeful for much. 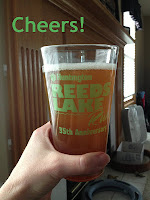 EXPO - there really wasn't one :)  This is definitely a small race and packet pickup on Friday night was just at the EGR High School gym.  I got there, found my number and picked up my stuff pretty quickly.  Unisex shirts (boo) but at least they had size smalls left since I got there early and they are tech (yeah).  I was pleasantly surprised to see the "special gift" for the 35th anniversary was a pint glass!  I headed home and had my usual pre-race dinner of Subway (oven roasted chicken with lots of veggies and southwest sauce, if you're wondering).  Hey, if it works, why screw with perfection :)  I also enjoyed a New Holland White Hatter in my new pint glass.

Race Morning - It was muggy/humid (so humid it was like breathing water - 91% or something crazy like that) so I wasn't expecting much.  This race has a 5k and 10k, or you can run both.  I had a few friends double dipping so I got there pretty early to see them off. While the 5k was going, my friend Pete and I ran a little warm up (probably about 3/4 of a mile) and then I did some strides and stretches.  I was already having trouble breathing because of the humidity and made sure to use my inhaler before the start. 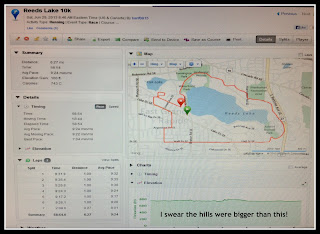 The Race - This felt like a tough course, with some rolling hills on the first half and a nice uphill right before the 5k split (but looking at the Garmin data makes the course look pancake flat).  I had no real time goals going into this race, but in the back of my mind I wanted a sub-60, I just didn't think I had it in me with the heat/humidity.  Guess I was wrong :)  My plan was to treat this like a tempo run.  Start easy in miles 1 and 2 and then push as hard as I could for the last 4.2 miles.  I ran with my friend Cat for a few minutes in miles 2 and 3 and she asked if I was going for sub-60.  We chatted about what my splits would need to be and I was already behind, so I told her I was just going to run as hard as I could. I saw my friend Tim at the bottom of Hall Street Hill and his smile & encouragement gave me a boost to get up the hill without walking.  Seeing people puking at the top was extra special. When I hit the 5k split at 30:10 or so I almost backed off because I didn't think I could pull off a negative split with as tired as the humidity and hills were already making me.  The entire 2nd half of the race was a mental tennis match - "you're done, slow down" to "you can breathe when you're done so suck it up cupcake" to "omg another hill, can I walk now?" to "move!".  The course is also very cruel in the last mile.  With about .75 to go, you can see the finish line but they make you do a .5 mile loop through one of the swanky EGR neighborhoods.  I can honestly say I didn't look at a single McMansion.  All I focused on was the ground and my watch (and anyone I thought I could turn into roadkill). That last .25 mile was probably one of the hardest stretches of road I've ever run.  It's called "Gas Light Village" for a reason and the street is very quaint and interspersed with brick.  I was so afraid I'd wipe out right before the finish but I really kicked it in, giving every ounce I had left. I could see the timing clock at the end and it still had a zero in the hours spot.  I CRUSHED my previous 10k PR and knew I'd hit sub-60 even if my watch was off! I left everything out on that course and couldn't breathe at all when I was done.  (That was actually a little scary.) I've never had to sit down and use my inhaler at the end of a race before, but I'm so thankful for the bench my friend found for me and the puffs from that little piece of plastic. I couldn't even operate my phone - I tried to snap of picture of my watch but I was weirdly shaky and couldn't hold my arms still.

Right after the finish, I found Pete and then Mindy and Cat.  We all PR'd!!! I ran into a few more friends and it seems everyone ran a great race. We grabbed some water, trail mix and bananas, and then I tried a bagel that I thought was cinnamon but it was actually onion.  Clearly my brain wasn't working. Not good. Sorry to anyone who saw me spit half chewed bagel into my hand and retch a little.  After hanging around for a bit, we went back to the van for a celebratory beer :) 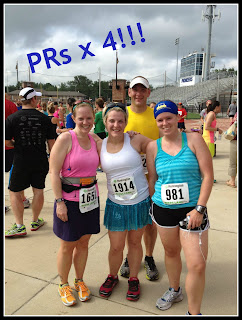 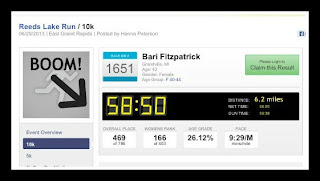 Age group (F 40-44): 13 of 42
The totals for each group on the QR code we could scan were WAY off on the instant results, as in it said 140 in my age group, making me think I made top 10%. Not cool, timer people. Burst my bubble a little bit when I checked the official results later, but I'm not going to let that get me down. I still kicked serious ass.

This race was AMAZING on so many levels.  It was a great course and while I didn't use any of the aid stations (I carried my own water but hardly drank any - oops) they looked well stocked and the volunteers were all really friendly.  The water at the finish line was ice cold and there was a variety of post-race foods to choose from.  I especially loved how the race finished with Reeds Lake right behind the finish line - it was beautiful.

(Today is also my first blog post over at Sisterhood of the Shrinking Jeans!  Please go check it out - I'm so excited to be writing for them and I'd love to hear what you all think.)