Pretty much since last winter, I've been training for one race or another.  I never have any aspirations to win, or even place in my age group - I'm slow, y'all - but I always want to do "well".  Well is a totally relative term and changes day to day.  Sometime after my 1/2 marathon last October, I decided I would train for and tackle the 25k Fifth Third River Bank Run.  I figured that would be my one big race for the spring and I'd be done with it.  Little did I know that I'd end up running a 10 mile race a few weeks before RBR, a 5k the week after (in a tutu!), and then finish up what I'd eventually termed "Marathon May" with my first travel race - the Soldier Field 10 Mile in Chicago two weeks after RBR.  Somehow, I'd even convinced my husband to sign up for that one too (I think it had to do with the 50 yard line finish).  My husband isn't much of a runner.  Wait - I take that back - he's a runner who never trains.  He can go weeks and weeks without running and then knock out 6 or 8 miles easily.  He'd never run 10.  I figured this was probably my one and only chance to beat him in a race, because even though I train my ass off, he's still faster than me.  I had endurance on my side.  Let's see how it played out, shall we?

We headed for Chicago after getting a bit of a late start at home.  I made poor M drive (he hates driving in the city) so I could play on twitter :)  The roads were clear, until just outside of the City. 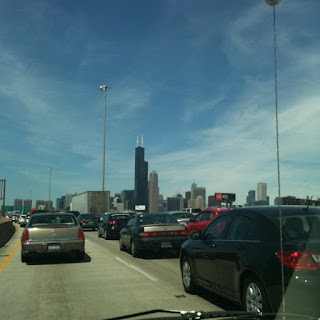 Our first stop was Fleet Feet Sports in the Pipers Alley area.  The packet pick-up was easy and well staffed and we got our shirts and bibs in no-time.  I was so geeked to see our bibs were personalized!  I've never had my name on a race bib before :)  We even had a few minutes to shop around, until M reminded me we'd only put an hour in the meter and had to walk back a few blocks to the car.  Party pooper. 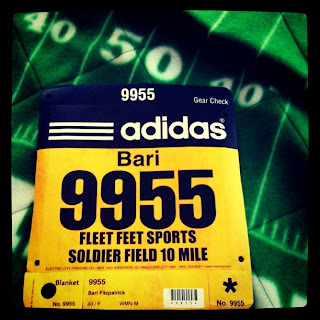 After leaving Fleet Feet Sports, we had fun ticking off the Garmin by taking wrong turns.  Eventually we found our way to our hotel.  We stayed at ﻿the Hyatt Regency McCormick Place and I would definitely stay there again.  Our room was beautiful and the staff was so nice.  Dinner at the hotel restaurant was also really good.  My chicken parm could have fed a family of six - no lie.  Before we ate dinner though, we mapped out a route and saw it was only about a mile to the stadium.  We walked most of the way so we'd know exactly where we'd need to go in the morning.  As long as I've lived in this area, I still can't get over how much Soldier Field has changed from when I was a kid.  Don't think I'll ever get used to it (kinda like the lights at Wrigley but that's another post). 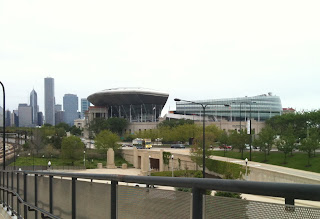 We turned in early and set our alarms for 5:15 am.  I was﻿ paranoid about not waking up, so we got a wake-up call too, but that was silly because I was pretty much up from 3 am on.  M and I got ourselves ready and cooked up our superexpensive oatmeal that we found in the hotel gift shop. Note to self: remember to bring your damn breakfast next time.  After eating and hydrating, we made the mile walk to Soldier Field.  There were so many other runners and spectators also making that early morning walk.  The weather was cool but muggy (mid 50's but 100% humidity).  There was so much haze that we couldn't see the tops of the skyscrapers. 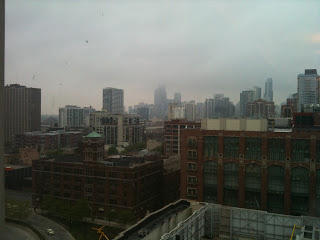 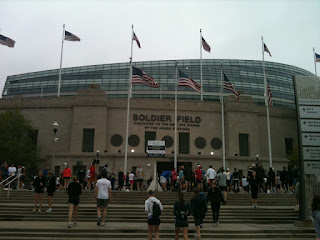 We got to the stadium and made our way inside to the gear check.  This is actually the first time I've ever checked gear at a race - I've always had M to hold it all for me!  After checking our gear we wandered around and checked out the field.  Because of the weather, they covered the grass past the finish line.  M and I both thought this was ridiculous, but whatever.﻿  I was a little cold, but decided to leave my long-sleeve shirt with the rest of our stuff.  Probably the smartest thing I did all day.  We headed outside to get ready for the 7:30 start.  There were 15000 people registered so there were also 4 starting corrals.  We were in the last corral to start because M didn't have any races long enough to submit for a seated corral.  No big deal though.  We just hung out and listened to the Memorial Day program they put on and rocked out to Springsteen and Mellencamp.  I gotta tell you, though.  15000 people take a LONG time to start.  By the time we started, almost 25 minutes later, the lead runner had already hit 5 miles. 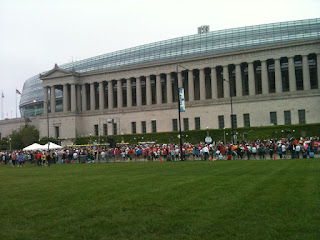 Finally it was our turn to go and we made our way to the starting line.  M seems to hate it when I give him running advice, but I told him he had to stop at the aide stations for water because of the weather.  I was carrying hydration, but he wasn't.  Also, I told him I wasn't planning to stop. 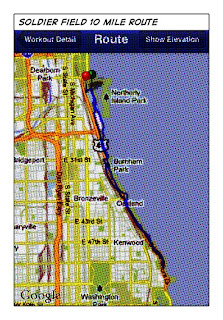 We made our start and headed away from the stadium and toward McCormick Place.  Running under McCormick was weird - it was very dark and there were LOTS of potholes.  I kept thinking I was going to fall.  M stayed with my through the first aide station at about mile 1.5 but then I didn't see him again until I made the turn around at about 5 miles.  From where we were, it looked like I probably had a 5 minute lead.  (Turns out, he stopped to use the facilities - rookie mistake - he should have peed in the bushes.)  Once we turned around and headed up the lake trail back towards the stadium, the congestion got REALLY frustrating.  I spent most of the first 5 miles passing a lot of people (the benefit to such a huge race) but on the trails passing became almost impossible.  It was extremely crowded and I found myself getting claustrophobic.  I felt great with my run and my pace too, but the heat and humidity were really starting to get to me and I kept hoping M was getting fluids.  I wanted to come in under 1:45, but the inability to get around people really slowed me down.  I also had some major pain around mile 7 - the first time I've felt actual PAIN during a race.  As I was running, sharp, shooting pain was flaring through my right leg from knee to hip.  Most the the pain was in my quad and hip and my first thought was stress fracture.  I walked a few times in the last 3 miles, but looking back at my splits it didn't slow me down as much as I thought it did (only 10-15 sec per mile).  I tried to focus on the beautiful scenery along the lake, but because of the haze, the Chicago skyline was pretty much nonexistent.  With less than a mile to go, I could finally see Soldier Field.  Now, if you've ever walked around Chicago, you know that everything seems MUCH closer than it really is!  It seemed to take forever to get around the stadium and into the tunnel that lead to the field.  Oddly - I had my 3rd fastest split in this last mile though!  We headed into the underbelly of Soldier Field and around a corner I could see light.  Here was the grass and I sprinted to the finish - making sure to look up and see myself on the jumbotron as I crossed the finish line.  So incredibly cool! 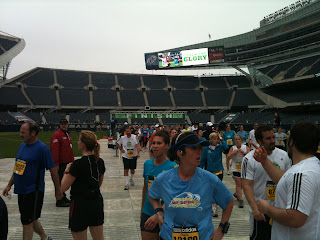 I waited for quite a while for M to finish, but I never saw him.  Turns out he finished only 1:03 behind me but 189 people finished in that minute!  The number of people on the field was unreal. 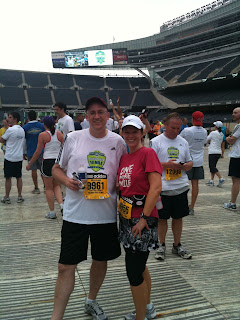 Once he found me, we headed off the field to get our medals and celebrated inside the stadium for a bit. 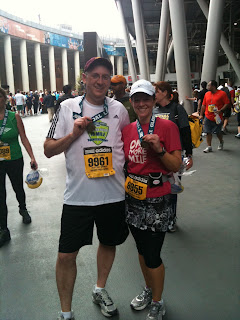 We made our way back to the hotel, walking much slower than we did to get to the race.  Poor M was really feeling those extra 2 miles over his previous longest run!   We got ourselves checked out of the hotel and headed out of the city.  The first stop was a well deserved lunch. 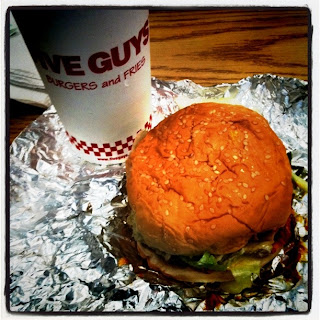 After lunch, I made M walk around IKEA for an hour before heading the 3 hours home.  All the way home, the rain poured down - and I thanked God it waited until after we were finished running (although the rain might have helped with the heat/humidity a bit).﻿  The rain matched my mood.  I was kicking myself for not finishing "better" - farther ahead of M and under 1:45, but so many of my friends kept reminding me that I had just finished my 3rd race in 3 weeks and I still beat M.  Gotta be happy with that.

Will I do this race again?  Possibly.  I loved the scenery, but the crowding was hard.  Gotta admit, though, the swag was pretty sweet! 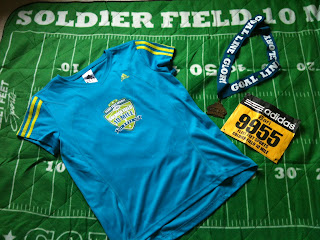