Yesterday I participated in my first marathon relay. I ran with 4 others as part of team "All About the Cupcakes" (because, let's face it, most of us run so we can eat). We are a diverse group with totally different race experiences, from shorter races to a full marathon, with the goal to just have fun.

The weather was cool at the start but because I had leg 2, I could wait in the YMCA for a little while before heading to the exchange zone. We all went outside to watch the start (holy crap those elite runners can FLY) and about 20 minutes after Brian took off, I jogged to the relay zone about 1/2 a mile away. I also added in some strides & turned on my music, dancing around to stay loose & warm.

I saw Brian, grabbed the wristband & took off. I REALLY took off. I started right after the 4:14 marathon pace group passed & found myself keeping up with their 9:something pace. Way too fast knowing how far I needed to run. This was mistake number 1 but I think I realized it before I did too much damage. I settled in to a better pace and just enjoyed the foggy morning & race energy.

The first 3 miles of my 6 were relatively flat & had lots of spectators. Then I hit the hills & struggled to keep running. I walked through the 2 aid stations (I didn't bring my own water - this would prove to be a huge mistake later) and took a gu around mile 4.5. I entered Millennium Park & quick texted Mike to let him know I had 1/2 a mile to go. I ran thru an aide station here since I knew the exchange zone was close. I handed off the band & my leg was over. 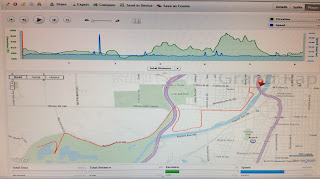 I stood around for a few, checked the garmin (and was happy I'd stayed under an 11mm but sad it wasn't closer to 10) and texted Heather to let her know Mike was on his way & that I was headed back to town. (This standing around was mistake number 3, in case you're counting).

I headed back roughly the way I came and a marathon runner offered to take my picture as I had my phone out. I think this was the last I smiled because after this the wheels came off.

As I started to run back to town, my legs cramped up. I don't know if it was the lack of water or the standing around, but either way it sucked out loud.  I ran/walked the 5 miles back to town. Needing to run all the hills again mentally killed me (and physically beat me up too). When I was running, my paces were in the 10s, but the amount of walking was just awful. The whole time I was run/walking back to town, every evil thought that could've entered my head did. Plus the course was deserted at this point, with the exception of 2 people I saw walking the marathon, the roads were open, and I was freaked out. I passed 1 aide station as they were breaking it down & got a 1/2 cup of water. I took baby sips & ran with it with the top folded over to try not to spill any. I was tired and likely dehydrated but only had about 1/4 cup of water to last me another 3.5 miles. Epic fail. At around the 9 or 10 mile mark, I took my last gu and finished the last 2 sips of water.  Not having enough water with the gu made my stomach hurt.  Once I got back into town near the zoo I moved to the sidewalks to avoid cars. I contemplated running into the park near the zoo to look for a drinking fountain, but the thought of adding another 1/2 mile to my run on what could've been a wild good chase made me want to cry.  I tripped on uneven sidewalk a few times. My legs were so tired, but even more so my will was pretty much shot.  I've never "hit the wall" on a run of this length.  Today I think I did. 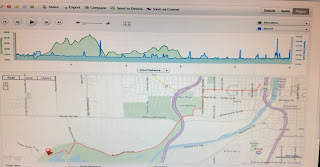 I finally made it back to the Y and found a friend who was spectating (after having ran a kickass half). I got a hug & went in search of beer. Mike found me and got me to eat a chili dog, which is crazy but I was so shaky and depleted I was willing to try anything.  I think all the salt in the hotdog helped a little.  The beer helped A LOT.

Mike and I walked around for awhile and then I went into the locker room to try and roll my legs a little with my stick.  We then found Angela (who had run the 4th leg) and went back to spectating. We got a text from Heather that she was at mile 25 and we watched for her to run across the finish with her. She's FAST! Mike and Angela could keep up but I couldn't catch her. Still, we finished and all got our cool medals (she'll deliver Brian's to him later).

We headed back to the beer area for more carb replacement & then headed to a local pizza place to finish refueling. 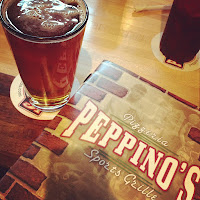 Team All About the Cupcakes ran a great marathon. We finished 21st of 29 co-ed teams in 4:08:36. I have no idea what our individual splits were (I only know mine and Mike's) but everyone ran a really good race.  Heather and Angela both said they felt guilty running their legs and passing so many people (who were in miles 14+ on the marathon course). They kept wanting to apologize and say "I just started." or "I'm only running the relay".  Since mine was at the beginning and I started in a mix of much faster runners, I was getting passed left and right, but still managed to pass a few people myself, especially on the hills.  In all likelihood, I'll never see that kind of a marathon time again, so it's cool I got to experience it with such a fun group of people. 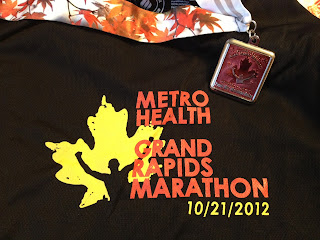 My overall run wasn't what I needed with only 2 long runs left before my half, but I'm still glad I did this. Next time I will NOT run back home afterwards, especially on deserted country roads with no water. I'm also re-thinking my fueling strategy for Disney. Peanut Butter gu, while very tasty, is not so great coming back up. Just sayin'.

Have you ever run a relay?