Today I'm giving thanks for speedwork.  Ok, now before y'all think I'm completely nuts, let me explain.  Bullet points might work for this. 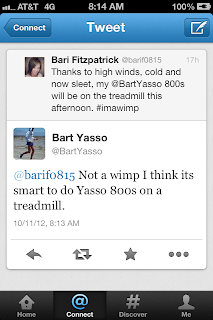 That tweet totally made my morning. I joke that I'm a real runner now because Bart Yasso tweeted me, but really I've been a badass mother runner all along.

Who would you love to get a tweet from? Have you ever received a tweet from someone "famous"?
at October 11, 2012