This recap is a bit late in coming, but better late than never, right?  I figure, it's only fair to take as long to write a recap as it takes to run the race.  In this case...a VERY long time.

Anyhoo....Back on Saturday, April 5th, while visiting Jaime and her family at the start of our spring break, Mike and I (along with Jaime) traveled about 30 minutes from her house to run the Black Mountain Greenway Challenge 10k.  The race started and ended at Pisgah Brewing which was a brewery we hadn't had the chance to visit when we were last in the Asheville area. 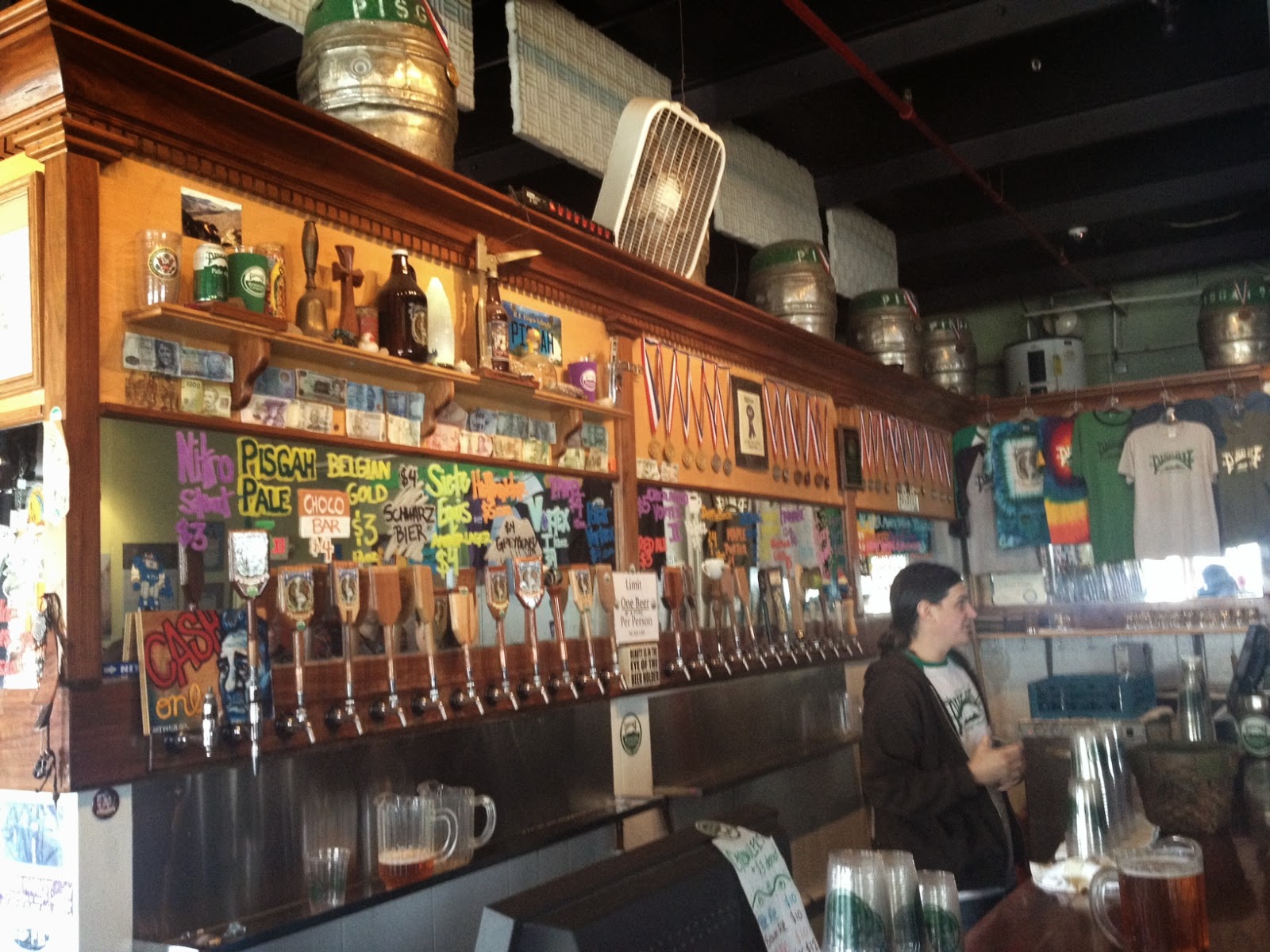 The weather was absolutely GLORIOUS for running.  Sunny and around 50 degrees.  Apparently, when you live in an area that's had snow on the ground since OCTOBER, 50 feels very warm.  Most of the runners were dressed more like Jaime (in her defense, she did lose the jacket before the race).  I had so many people stop and ask me if I was freezing.  Um...not even a little bit. 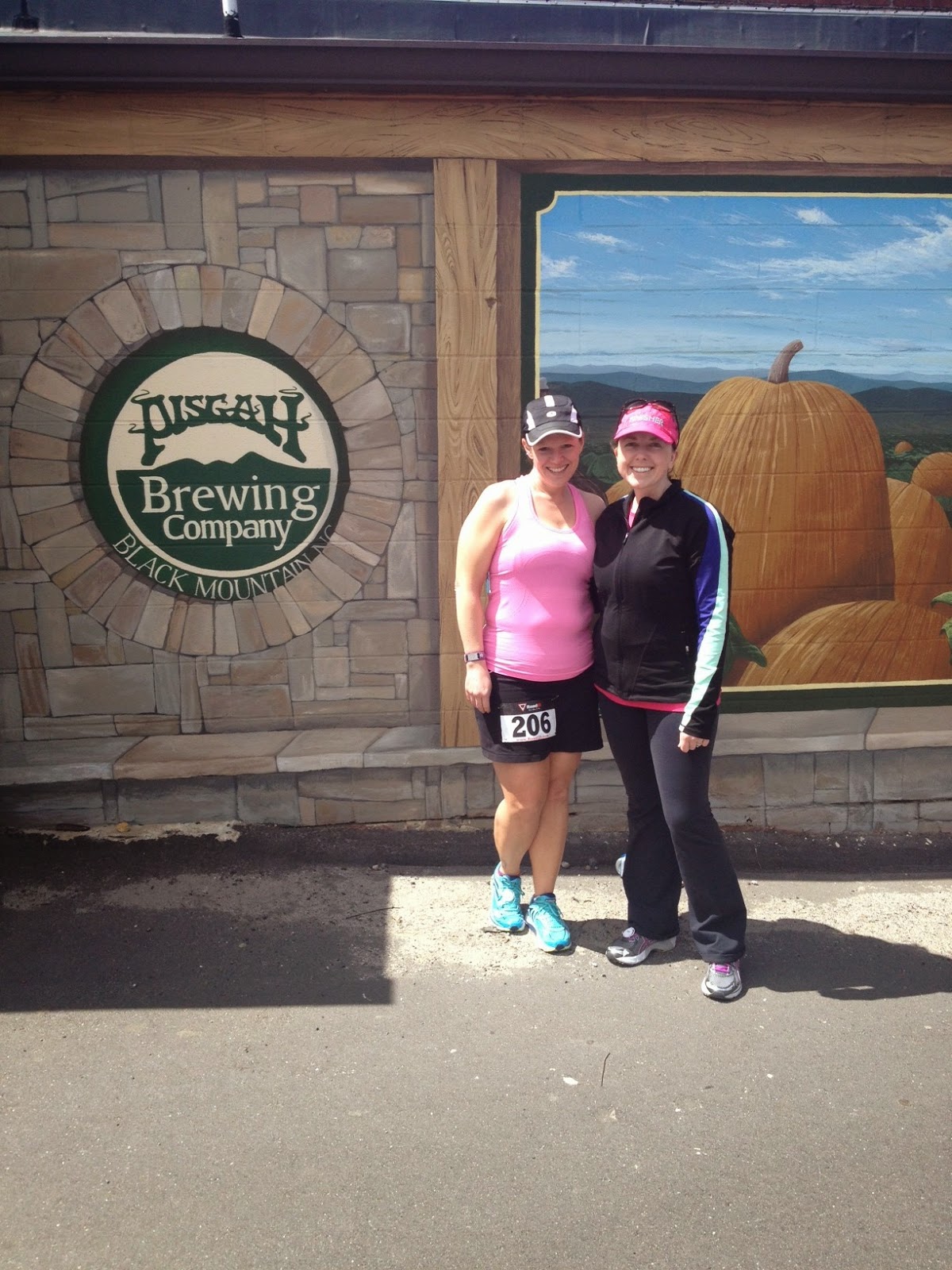 We did have chip timing but there were no timing mats at the start.  Everyone just sort of milled around.  This couple with the beer on a fishing pole kind of cracked me up. The race director told the crowd that the 5k folks needed to turn left at the top of the hill (um...HILL???) and the 10k runners would head to the right.  The crowd counted down and we were off. 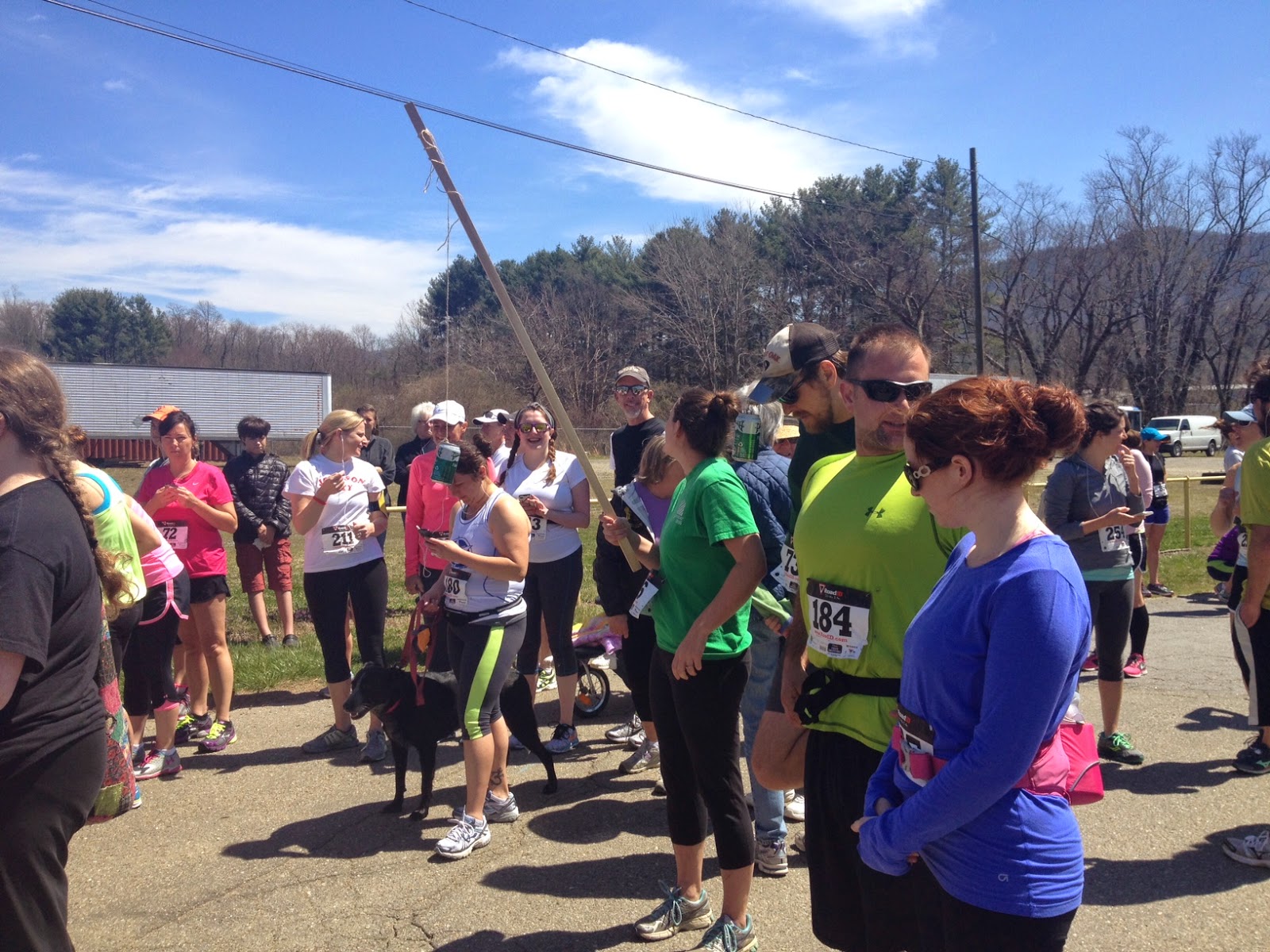 The race started on the tiniest of uphills but about 3/4 of a mile in, the hill really started to climb.  This flatlander knew she was in serious trouble.  The 10k runners made their turn around mile 1 and the hill kept going.  I had started the race without my music but I put the earbuds in within that first mile.  Jaime and I stuck together for the first 2 miles but at the downhill there, she felt the desire to take off and I felt the desire to walk.  My injuries/PF were not liking the hills and the much warmer temps than I was used to were doing a number on my breathing. 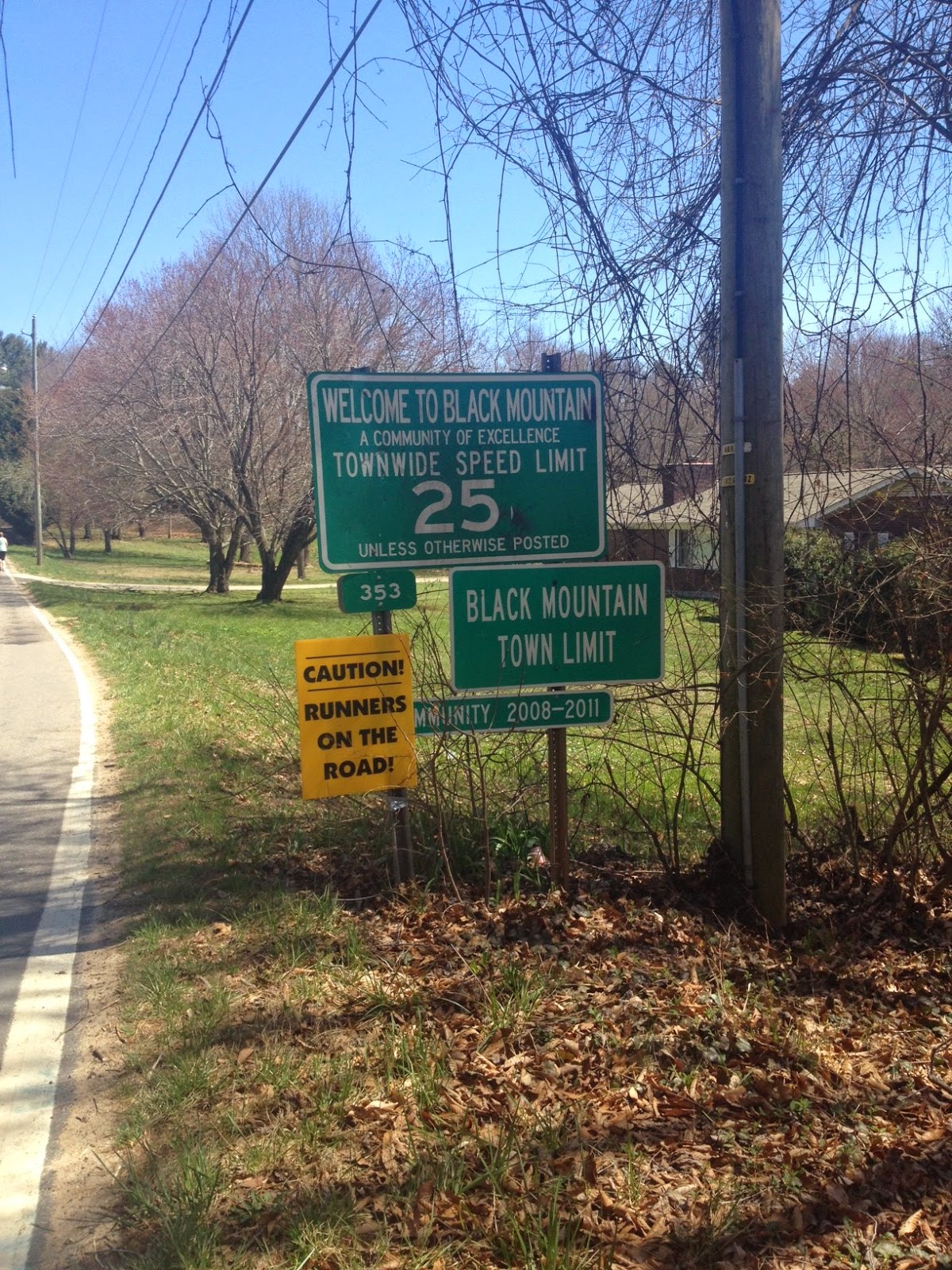 The race made a loop around a very pretty lake somewhere around the mile 3 or 4 mark.  I stopped and took some pictures since I knew very early on that this was NOT my race. 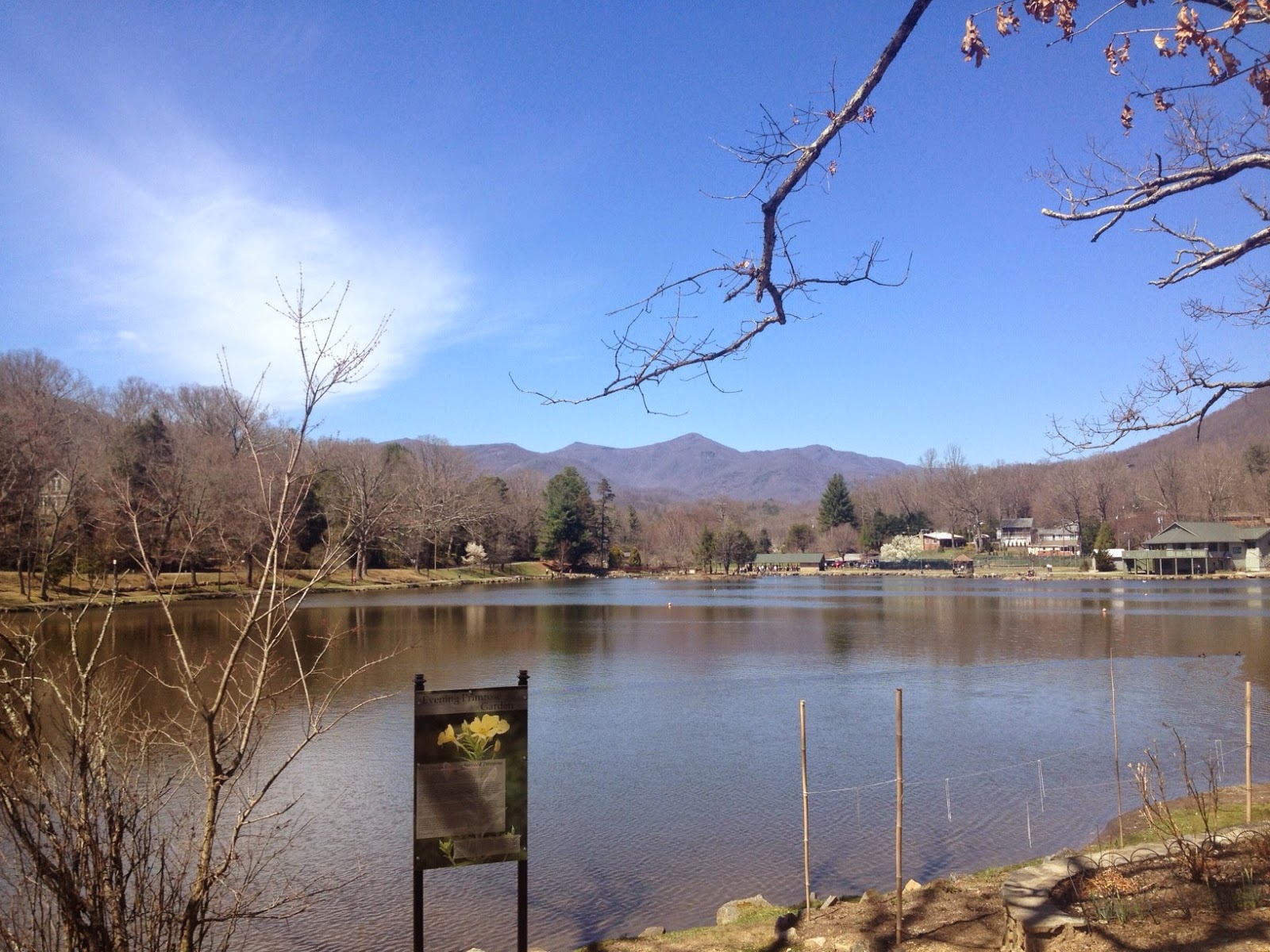 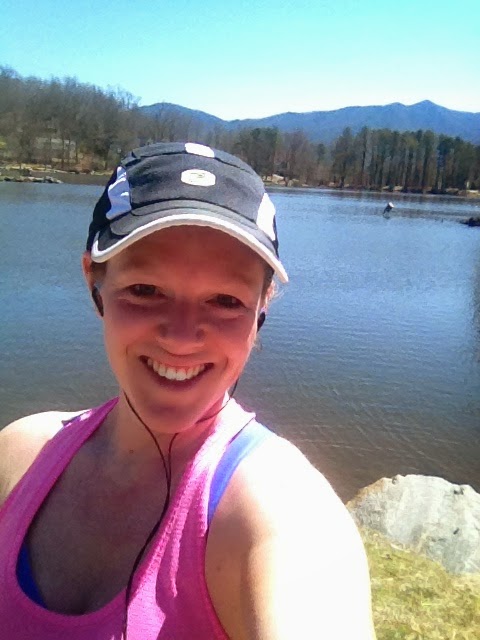 We headed back toward the starting line and I was really counting down the time until I would be done and get my beer.  While the weather and scenery were beautiful, the hills were kicking my ass.  I wasn't liking what they were doing to my head, much less my legs. 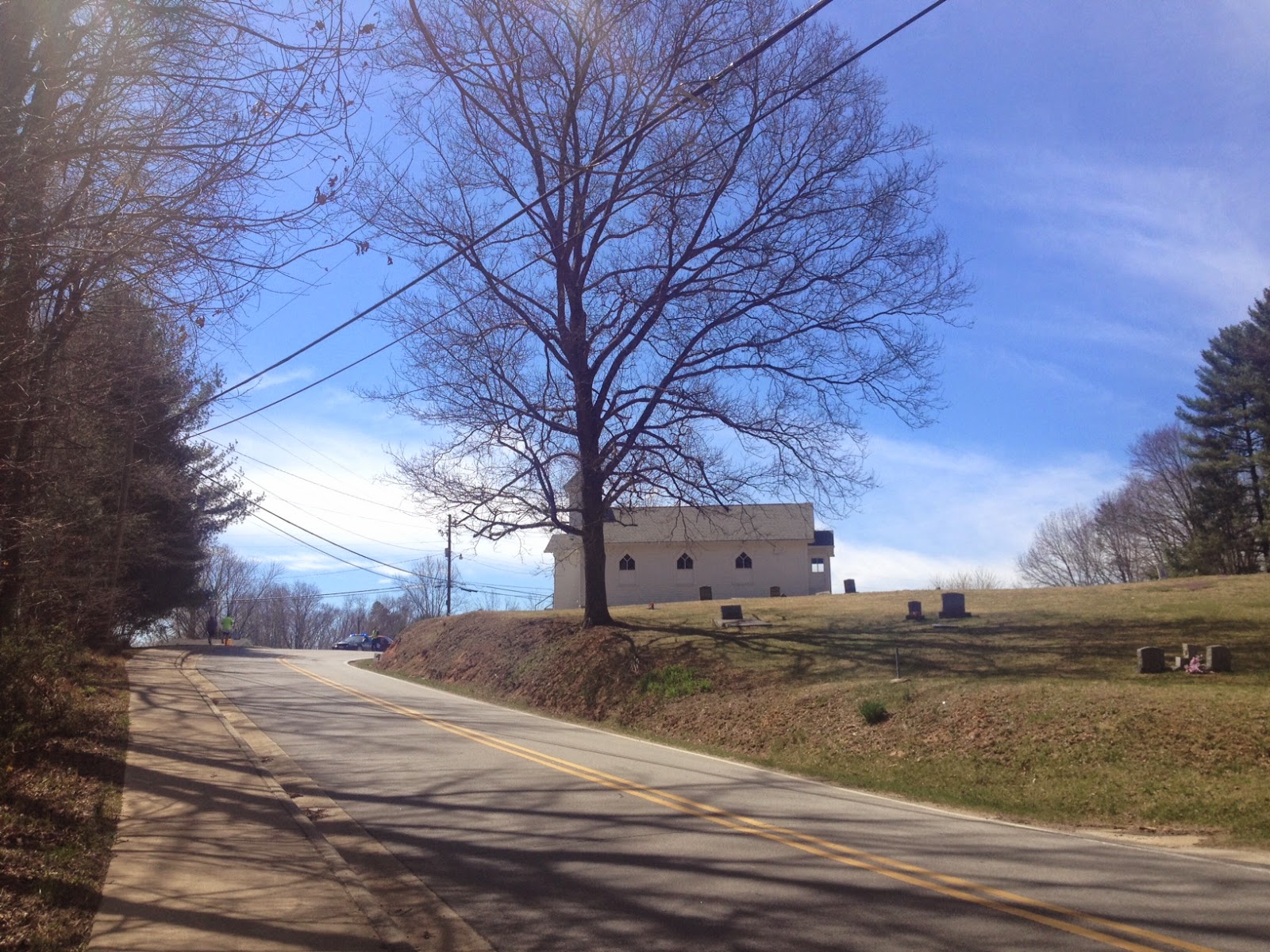 We got to come back down a hill around mile 5 but then shot back up one in mile 6.  Oy the hills just didn't want to quit!  I guess running on a "mountain" I should have expected that much.  When I got to the finish line, Jaime commented that a good number of the racers came in from a different direction.  My watch had me pretty much right on at 6.2 so I'm certain I came in the correct way (and so did Jaime).  Mike went the other direction so I don't know if his course was long or short. 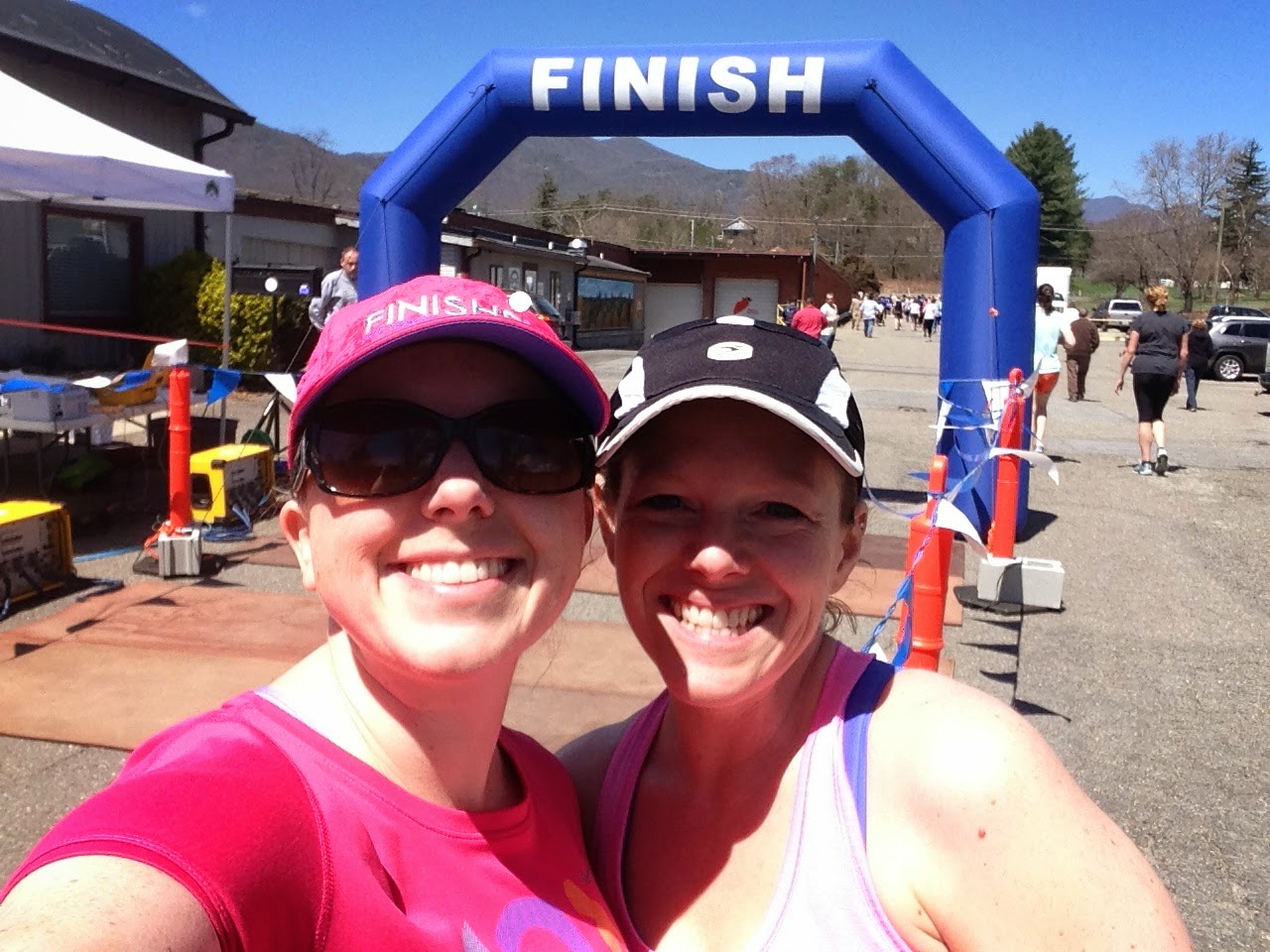 Pisgah Brewing had a food truck selling all sorts of sausages.  Mike ordered an alligator sausage and based on the time it took to get our food, they had to go wrestle the gator.  It was really delicious though and tasted nothing like chicken - more like a bratwurst.  I also enjoyed a couple of beers after the finish that were quite tasty. 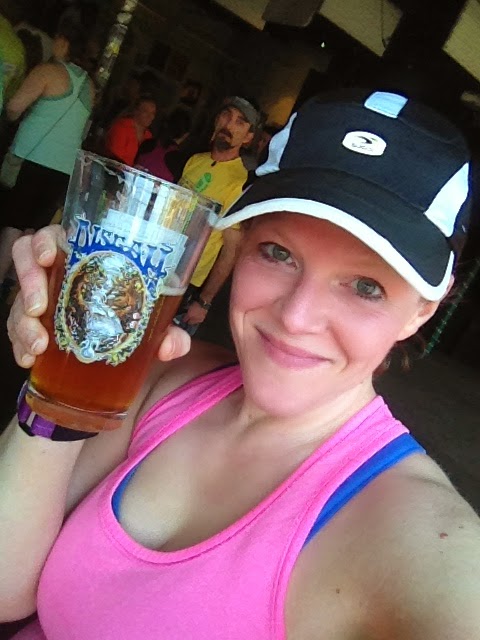 Overall, this was a pretty good race.  For $30, you got chip timing of the race plus a pint glass and your first beer.  If runners wanted a shirt, that was an extra charge. All the confusion about the course might have been an issue for people who were actually racing this.  Since this was my worst 10k EVER, I didn't really care.  Considering I'm injured and I ran on all those hills, I'm at peace with my crappy finish. Plus it was really fun to hang out with Jaime, run a beautiful course, and check out a new brewery. 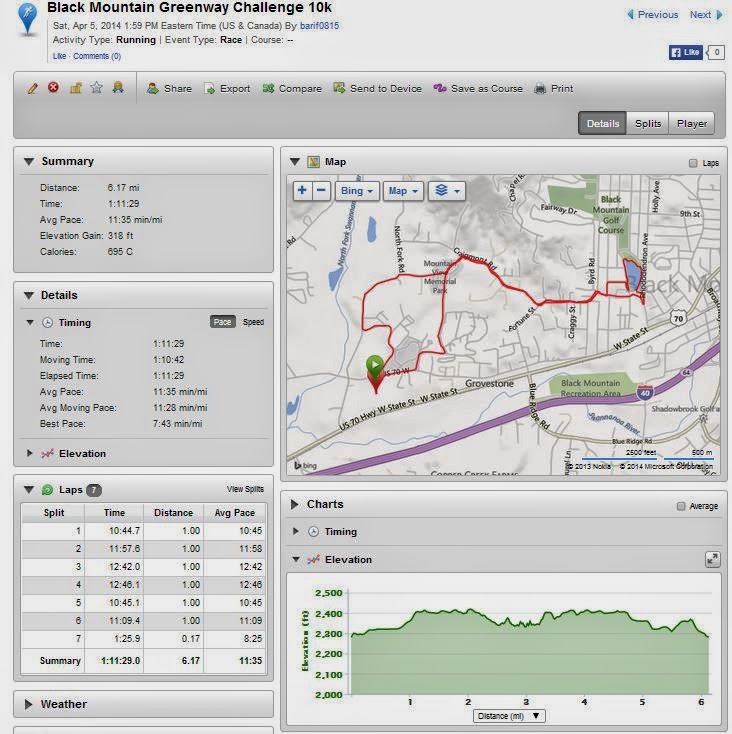