I gotta say, it's funny how my body just knows when it needs to get up on race day.  Even though the day before the race was a long and full day, I woke up at 3:00 am, 15 minutes before my alarm.  (I was also up around 1:30 am.)  Beki and I got ourselves ready and I had a bowl of oatmeal made with hot water from the coffee maker (gross, btw - Beki couldn't eat hers).  Andrea was meeting us in the lobby at 4:00, so downstairs we headed!
The temperature was in the mid 40s, so I opted for my "It's not sweat, it's pixie dust" t-shirt, long bra top and sports bra, arm sleeves and capris, plus my awesome Team Sparkle skirt and wings! (I also wore 2 belts (hydration and bib holder), and I don't think I'll do that again.  I really don't like the way my fuel belts look in pictures so I've gotta come up with a different system - vanity, sue me.)  Luckily we got outside just as one of the shuttle buses was pulling up, so we didn't need to walk the 1.5 miles to the starting line - yeah!

There was a nice walk through Downtown Disney to the start.  We found some cute pirates along the way and couldn't resist taking pictures. 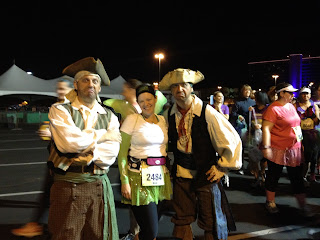 There was a DJ playing music, tons of port-a-johns, and so many people milling about.  Even with all the people, we were able to meet up with Barb for a quick hug and picture before we left to find our corral. 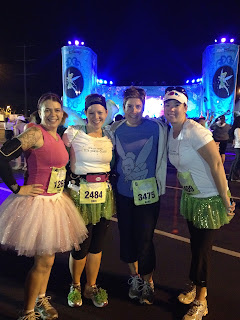 Once we got to our corral we found Tiffany! 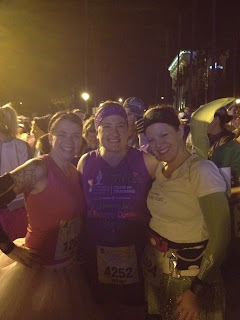 There were adorable costumes and wings everywhere.  Before long, corral A was off to fireworks. 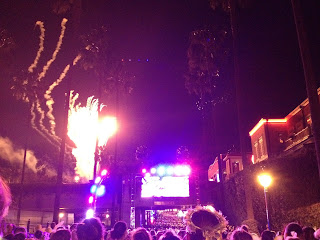 We were just a few minutes behind and waved to Minnie and Daisy as we crossed the starting line. 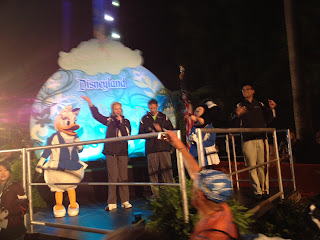 Mile 1: The first mile wound outside the parks and up a couple of hills as we crossed the highway.  The number of people was just insane and our pace was really slow.  Beki and I had decided to try and run the race together as best we could, so we did our dodge and weave as we tried to get around the walkers and slower runners. In no time at all, we were headed back into Disneyland.
Miles 2-3+: We entered the park through some weird back entrance that was usually reserved for cast members.  They were there cheering us on and warning us about the twisty course.  A bunch of parade floats were out for us to see and before long we happened upon the first characters, Cinderella and Belle with their men.  The line was ridiculously long so I didn't stand in line, but Beki and I both stopped to snap some pictures. 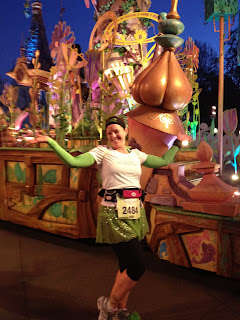 After a cast member snapped my picture, I looked around for Beki and couldn't find her.  I thought for sure I'd lost my running partner.  I decided to just keep running and headed down Main Street and the lights were so pretty.  I ended up running into Beki at the next character stop! There were quite a few picture opportunities in the park and we didn't really care about our time, so we stopped for most of them. 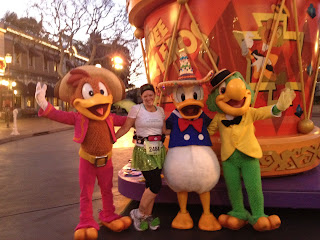 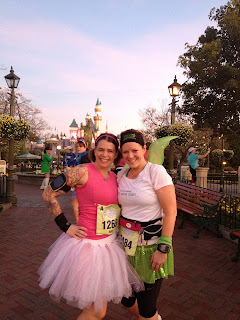 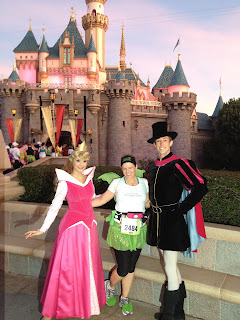 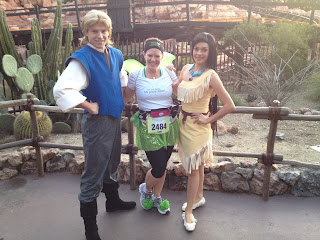 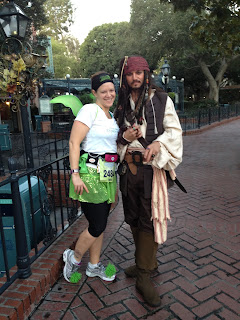 I think we stopped for just about every character we could - our time at the 5k point was around 47 minutes and we cheered - pretty funny if you ask me!
Miles 4-11: Somewhere around mile 4, we headed through Downtown Disney and there were about 100 women from the Red Hat Society cheering.  I almost stopped to take another picture because these women were awesome, but we decided we wanted to make up some time.  This part of the race was just like any other road race, but Disney made sure there were tons of HS cheer squads, dance teams, marching bands, hula dancers, etc to keep us entertained.  These 7 miles were run between and 11 and 12 minute/mile pace, which was definitely slower than I'd planned, but the 9 hours on my feet the day before at Disneyland had taken their toll.  I don't think I could've run much faster if I'd tried.  At around mile 7 1/2, I looked to my right and recognized a twitter friend, Mihael (@smplefy646)!  Seeing a friendly face at that point in the race was awesome. 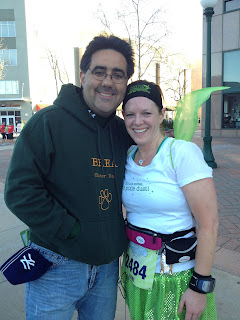 We got hugs and high-fives and headed on our way.  While we were out on the streets, I was really feeling my feet and my right hip was starting to complain.  Beki and I walked through the water stops and around mile 9 or 10 started walking for a bit at the top of every mile.  The sun had come up and I was definitely wishing for some sunglasses (and new feet).  Even with our walk breaks, we kept our pace under a 12 m/m.  It was amazing how many people we were still dodging at this point too.  Along this section of the route was an awesome band comprised of soldiers! 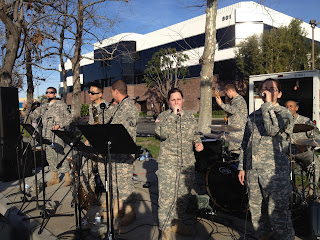 Mile 11-ish to the end: At this point, we started heading back toward the Disney property.  We ran into California Adventure and through the really cute Bugs Life area.  I was so focused on getting to the finish line at this point that I didn't pay much attention to the park.  We did stop for one more photo op because Beki and I both love Monster's Inc. 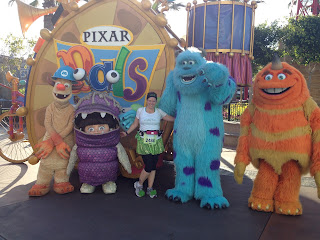 We were in the home stretch and I about lost it when we passed a DJ booth and Katy Perry's "Firework" came on.  (It's sorta my song and Beki even commented about it!)  People kept telling us the finish line was "right around the corner" but there were actually about 4 corners to turn before we finally saw the finish!  Beki convinced me to pick up the pace and we finished that last .1 with a 10 m/m average pace (and max 8:51 m/m!). 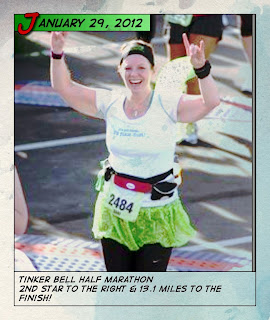 I'd just completed my 2nd official half marathon in the SLOWEST time EVER, but I had the MOST FUN EVER in a race.  I got to run with one of my dearest friends, take pictures with tons of Disney characters, get sprinkled with Pixie Dust, and rock this kick-ass medal at the end. 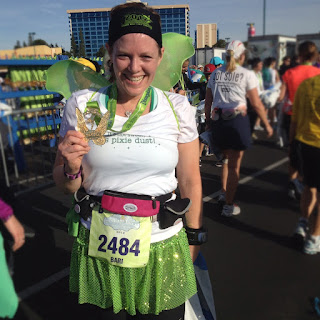 After we finished our race and got some bagels and fruit, we walked through Downtown Disney again and stopped at one of the stores so I could get souvenirs for my kids (nothing like waiting to the last minute).  While there, Beki realized how close to checkout time it was, so we hobbled the 1.5 miles back to the hotel so we could quickly pack and get out of there.  I had one stop I wanted to make before she took me to the airport. 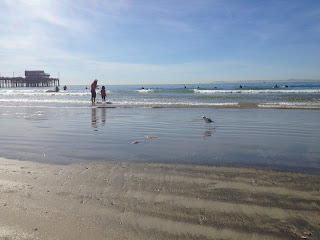 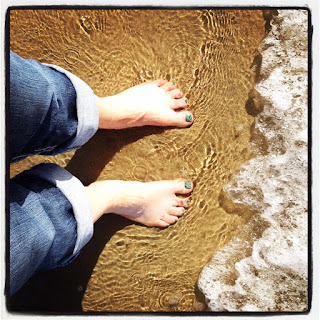 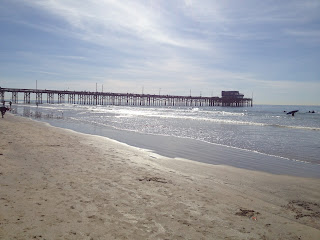 I'd never seen the Pacific ocean and this girl couldn't leave California without putting her toes in the water.

"Magical" doesn't even begin to describe my Tinker Bell Half Marathon weekend.  It absolutely sparkled and glittered with pixie dust.