This past Saturday I participated in a group bike ride put on my two of our local breweries. The Coq to the Fly was a 15 mile ride from Brewery Vivant in Grand Rapids to Rockford Brewing in Rockford. It wasn't a race but since I haven't posted a race report in a long time and don't know when I will again, I thought it would be run to recap the ride.

We started with a little carb loading at Vivant. The Perdition black ale was fantastic and the pretzels were yummy - I wasn't crazy about the cheese stuff so I dunked mine in yellow mustard. We sat next to a couple girls "The Beths" who were in town for a conference and decided to do the ride. They were hilarious.

This was clearly a ride for anyone. Bikes ranged from Fat Tires, to mountain bikes, to low-end road bikes like mine (I wimped out and put my old pedals back on for this) to super expensive tri-bikes.  I debated for awhile about riding my old hybrid and I'm glad I decided at the last minute to take my road bike.  I don't think I'd have finished if I'd ridden the other one.

Even seeing the range of riders, I was a bit intimidated by all the serious bikers. After chatting and finishing a beer, the ride started. The first 5 miles were through town, including a 2 mile downhill on cobblestone at the beginning. If you know me at all, you know I don't ride in the street, much less around other bikes, so to be in a crowd of 150+ riders had me very freaked out. I HATED the first 5 miles with a passion. Our friend, Mark, kept checking on me but I wasn't happy around all the cars and bikes. It was very slow going with lots of stops. The first 4 miles ranged from 8 to 13 mph but once we got to Riverside Park and the White Pine Trail it was better. I hung with Mike and Mark for about 5 miles (biking around 13 to 14 mph) until I decided I needed to fly to the Fly and picked up my pace to around 15 mph. I made it to Rockford (15.3 miles) in about an hour and 8 minutes (not counting all the traffic stops), which was only an average of 13.4 mph. 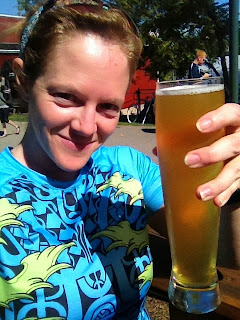 Once Mike and Mark showed up a couple minutes later, we headed inside Rockford Brewing to refuel.  My White Pine Wheat was delish and very refreshing after the 15 mile ride.

Rockford had bike racks set up and it was so cool to see how many people participated in the ride.

After we finished our first (yes, I said "first") beers, we headed out back to the beer tent where we got koozies.  They don't work as well on plastic cups but whatever.  The beer tent had live music and we stood around for an hour or so chatting with The Beths.  There was a charity selling BBQ pulled pork sandwiches and I was hungry so I ordered one.  It wasn't good and I ended up only eating a few bites and then eating the potato salad that came with it.  Diet Fail.

After a few beers and that a little bit if food, Mike and I headed back to GR. The wind on the way back was brutal and there were times I thought I wasn't moving. We stopped after 10 awful, windy miles at Riverside Park to hit the bathrooms and look at the water (I should have taken pictures on the White Pine Trail). Those first 10 miles were at a decent pace considering we'd had some beers and had been standing around, but still slower than I can normally ride (splits ranged from 12 - 16 mph).

We stopped again in town before we hit the major city streets and traffic to check out a couple ArtPrize exhibits in 6th Street Park.

Once we got back into town, I was bitchy and so tired of riding (I set about a 10 mile distance PR on this ride). The last 2 miles were back up that cobblestone hill and I my speed was under 10 mph. Major suck but I refused to get out of my big gear - I think I would have tipped over if I'd downshifted any further. I decided drivers are jerks too, especially after almost getting hit by some d-bag who backed into an intersection while I was going up the damn hill. The ride back to Vivant was 15.4 miles and it took 1:16:54, not counting stops (12 mph average).

Would I do this ride again? Probably not.  I don't think I will ever feel comfortable riding in car lanes, using hand signals, and stopping behind busses and with cars inches from my tires.  There were also too many people around for me to feel comfortable.  I was constantly worried I was going to do something to make someone else crash, or someone was going to crash into me.  Not a fun was to ride.  Overall, I rode 30.7 miles in about 2 hours and 25 minutes.  Like I said, a good 10 mile distance PR but the speed (or lack thereof) was nothing to be proud of.  Plus, negating all the calories burned on beers during the ride was pretty stupid.

Have you ever participated in a huge group ride like this? Love it or hate it?