A Down and Dirty Race Report

Before all this injury nonsense started, I agreed to run a 10k mud run with Erin.  (Her race report is here  -crazy girl had it written before I'd even gotten home!) After my stupid injury, she agreed to step down to the 5k and just walk it, which turned out to be an awesome decision (except for our whole race time getting fraked up, but this wasn't about the time anyway).  I had, what I can honestly say, the most fun I've ever had "racing" today.  I'm thinking the Down and Dirty Mud Run in Chicago rivaled my Tinker Bell 1/2 experience by far (maybe cuz I only did 3 miles instead of 13.1, but whatever - totally different races).

After a crappy night of sleep (I swear our hotel room was about 100*) we got up bright and early and headed to the farm where the mud run was starting.  It was beautiful! There were horses, ponds, and even a plane parked there! We had a good hour to wait for the start of our race, so we wandered around, checked out the fun stuff people were wearing (no other sparkle skirts, but we saw a few tutus on guys, people who were obviously teams, families - it was pretty cool), and watched the 10k racers start.  The first wave of each race consisted of service men and women (military, police, firefighters) and they got lots of cheers.  (The race partners with Operation Gratitude so there were tons of hawt dudes and dudettes in fatigues willing to lend a hand or motivate you along. I'd be thrilled to run along side a bunch of Marines and have them yell at me any day! Eye Candy For the Win!)

Since we were planning on walking the course (I was under "no running" orders from my doctor) we lined up with the last wave and before too long, we were off.  Each wave started with a mini-cannon BOOM and there were several minutes between each wave so the course wasn't too crowded.  I am PROUD to say I made it through the entire 5k course without taking a tumble, which was EXTREMELY hard given the massive grassy hills we had to climb up and down and I didn't skip a single obstacle! 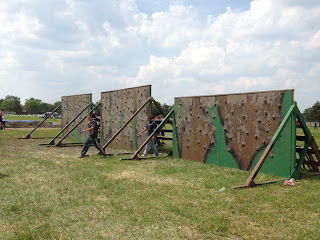 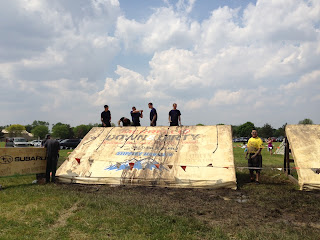 If there was any question at all as to whether we got muddy during this race, this picture should remove all doubt.  We had an absolute BLAST! 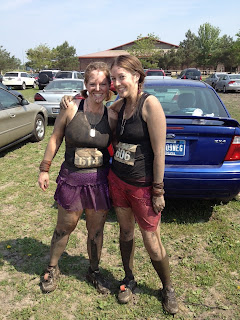 I love this girl and had the best.day.ever. hanging out and getting WAY outside my comfort zone. I felt strong and fit and I haven't felt like that for quite a while.  If someone said I could do this course again tomorrow I would be there in a heartbeat. 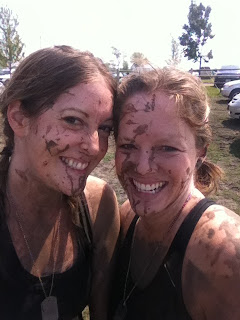 Tonight I'm actually feeling pretty good.  The only visible wounds are the scrapes on my knees and elbows.  My left ankle (the one that's been in a boot for almost a month) is stiff and sore and so is my right knee (the one that landed on a rock).  Oddly, my injured shin doesn't hurt at all.  I suspect the morning will bring some seriously sore arms from all the walls and ropes work and I'd be shocked if the shin didn't complain some, too. 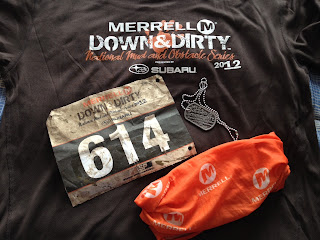 I left this race with some pretty sweet swag (including a DOG TAG for this bling whore!!!) and a new-found burst of confidence and bad-assery.  I'd thought this would by my year of the half-mary's, but like a friend said tonight, this is turning into my "bad ass year".  I finished a 1/2 marathon with a stress reaction and just finished my first mud run/obstacle course.  Next up...dare I say my first triathlon?