About 10 days ago, I made the decision to try eating paleo-ish in an effort to get my weight and eating habits under control.  What's "paleo-ish"?  I've upped my protein, veggie and fruit consumption and started eating sweet potatoes.  Other than fries, I don't usually eat regular potatoes anyway but I need something to replace some of my carbs.  I've cut out all grains (with the exception of oatmeal before long runs and a little bit of oatmeal in last night's meatloaf), no dairy, and for right now, no alcohol.  I'm still putting non-dairy flavored creamer in my coffee because I'd probably cut someone if I didn't have at least one thing that makes me happy. I haven't gone nuts and bought a bunch of weird and horribly overpriced flours or switched from soy sauce to coconut aminos - whatever the eff those are.  So, paleo-ish. 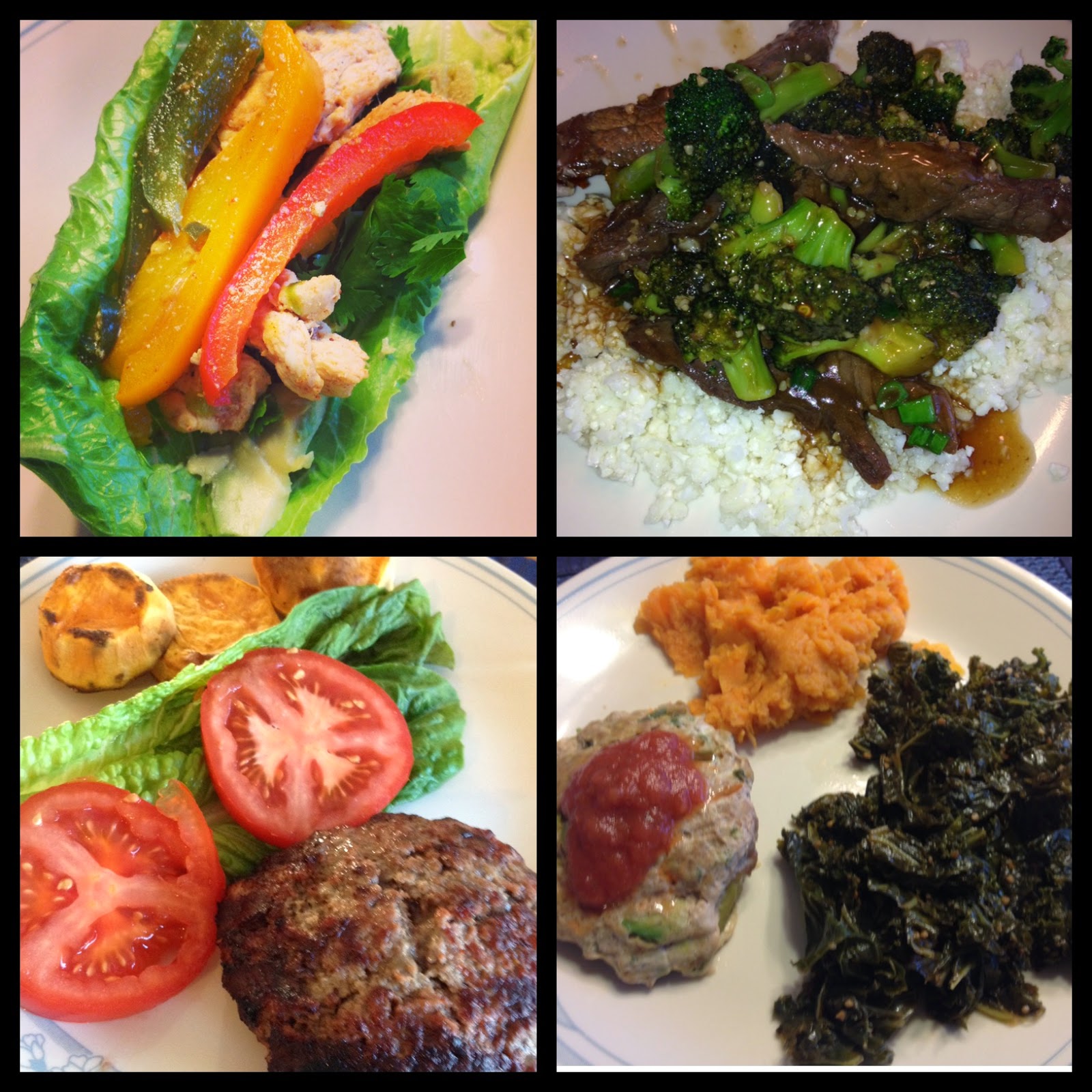 Some of the foods I've tried have been real winners.  The Chicken Fried "Rice" I posted on Monday has probably been my favorite new meal. For Cinco de Mayo, I had homemade chicken fajitas wrapped in lettuce.  This was a little bit disappointing when the rest of the family is eating tortillas but it was passable.  The Mongolian Beef with Broccoli over cauliflower rice was decent but missing something. I need to work on that recipe a bit.

There were also some flops.  The avocado stuffed burger was just a PITA to make and I think would've tasted better with the avocado just on the top.  Also, I really hated eating a burger with a knife and fork while everyone else had theirs on buns like normal people.  The bottom right hand picture was a big time flop.  That mound of grey stuff is supposed to be an avocado turkey burger.  The flavor was ok, but as my son pointed out, it looked like puke.  The kale and sweet potatoes were good though.  For breakfasts, I've been eating eggs scrambled with veggies or made into an omelet with a side of fruit.  I decided to make little egg cups (like in a muffin tin) and those were just ok.  I think I'll stick with taking extra time to cook the eggs in the morning.

I did make one mistake by having a Diet Coke one day for lunch.  I was up a pound the next day.  Maybe completely unrelated or maybe not.

As for weight loss?  I lost 7.2 pounds between last week Monday and today.  I'm sure 90% of that is water weight and just like on Biggest Loser, this coming week will probably suck for a loss, but it's a start.  I was really hoping to be back into a better decade today and I missed it by almost 2 pounds. Probably won't see it next week either.

So, yes, I'm going to try to stick with this.  I DO plan on having a beer after my race on Saturday but I still haven't figured out what I'm eating Friday night.  I'm also still looking for paleo-ish recipes that don't require a ton of super weird or expensive ingredients, so if you have ideas, hit me up in the comments.
at May 07, 2014