Back in April, I ran my first women's only half marathon and I was HOOKED.  I was working as an ambassador for Another Mother Runner at the Gazelle Girl Half Marathon here in Grand Rapids, MI.  I met so many first time half-marathoners at the Expotique that I knew I absolutely had to be a part of running in this environment.  I signed up for the race at the expo and ran with only a 7 mile long run under my belt (do as I say, not as I do - I've run lots of halfs and had a plan to cover the distance).  Seeing women I'd met at the Expotique while out on the course and the camaraderie and encouragement everyone was giving was infectious. 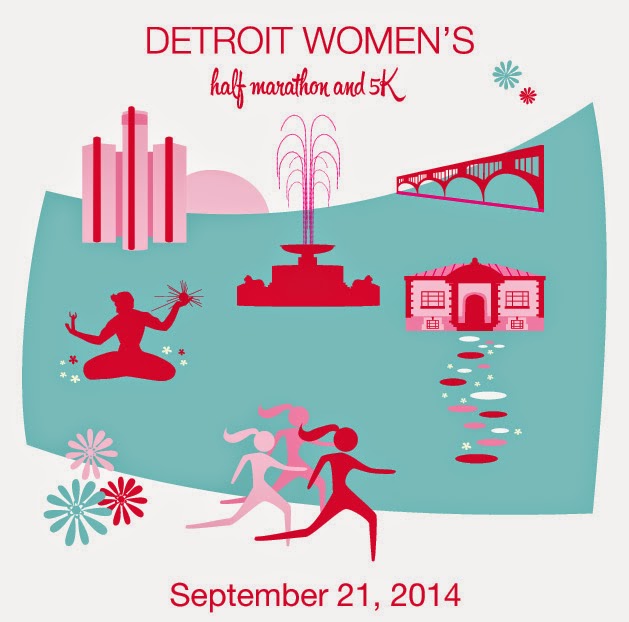 Fast forward a few months.  I have been given the opportunity to again partner with Another Mother Runner as their AMR Ambassador at the Detroit Women's Half Marathon and 5k September 20 and 21, 2014!  In addition to rep'ing AMR at the Expotique on September 20th (please come see me at the AMR booth!!!), the wonderful women behind the Detroit Women's Half Marathon and 5k have partnered with me as one of their featured bloggers.

The Detroit Women's Half Marathon and 5k was a huge success in their inaugural year last year and they have even more planned for 2014. Having outgrown their space, they are planning a bigger and better Expotique at Cobo Hall with tons of fun exhibitors, an incredible swag packet, pampering, and a shake-out run hosted by Fellow Flowers!  The Detroit Women's Half Marathon and 5k have chosen Go Red for Women, an initiative designed to empower women to take charge of their heart health, as their charity partner.  They are profiling women Heart Heroes on their website because they are so passionate about women's heart health.  In addition to telling their story, women selected as Heart Heroes receive complementary entry to the race of their choice.  If you would like to apply to be a Heart Hero, please visit the Heart Hero page for more information.

I'm so excited to run the half marathon on beautiful Belle Isle, which is now a Michigan State Park, as a tune-up race to the Detroit International Marathon!  But what if you can't make it to Detroit the weekend of September 20 and 21?  In addition to the race on Belle Isle, this year women can register to run the Detroit Women's Half Marathon and 5k as a virtual race!  All virtual racers will receive the same "swag" as race day participants, including a super soft t-shirt, bib number, virtual swag bag, and the coolest medal in the D!

What does this mean to you?  It means one of my lucky readers is going to get to run the Detroit Women's Half Marathon or 5k too!  They have offered one race entry for me to give away to one of you.  Are you SQUEEEING yet???  You will have your choice of the half marathon or 5k.  (If you are not within a reasonable distance, I can make this a virtual race entry but would STRONGLY encourage you to run the race with me on Belle Isle.  The winner will be responsible for any transportation or lodging needs.)

So how do you get to be a part of Women Run the D?  Just enter the handy-dandy Rafflecopter contest below!  I hope to see you in Detroit!

The contest will run from Tuesday, July 15, 2014 to Monday, July 21, 2014 and is open to anyone.  Winner will be announced by July 23rd and will have until the 26th to confirm or I will select another winner.

The legal mumbo jumbo: I was provided with a complimentary entry to the Detroit Women's Half Marathon and 5k as well as a second entry to give away.  Winner is responsible for any and all costs related to getting to the race and lodging.  If you choose to use the winnings as a virtual race, please let me know.  The Detroit Women's Half Marathon and 5k, myself, and Live Laugh Run Breathe are trusting you to train and run responsibly.  No claims may be made against us for injuries that may occur during the event.  You know what you are getting yourself into when you sign up to run.  You'll be signing the waiver when you register and all that stuff applies here too.
at July 15, 2014